It is the year 200X and advances in network technology have given rise to a virtual Cyberworld composed of all the linked computer systems embedded in every facet of modern life. People interact with this world through their handheld Personal Terminals, which may house an autonomous AI entity known as a navi. These navis interact with the cyberworld much as their human operators do with the real world, but with far less limiting physical laws.

What could have been a perfect futuristic utopia has instead been plagued with problems since its creation. Bugs in its various interlocking systems give rise to abnormalities in the world. The bugs may manifest as viruses -- bestial, destructive entities that indiscriminately attack the cyberworld infrastructure and its navi inhabitants. The evil of humanity had infected network society as well, with hackers quick to exploit the power and freedom of the cyberworld for personal gain. To defend itself from these threats, network society weaponized navis into the virtual equivalent of superhumans. Operators are able to temporarily enhance their navis' powers by using BattleChips -- packaged weapons and upgrades that can be delivered on-demand or in a managed batch to the navi in a combat situation. Most BattleChips are derived from the abilities of the very viruses the navis bust. The escalation and exchange of powers combine to make the cyberworld a very hostile place...but not enough to discourage turning virus-busting combat into a recreational sport between navis, called "NetBattle".

For a navi, deletion is the death, albeit in a world where death has little power. Normally, a navi deleted in battle online breaks down to its component codes, automatically transfers back to its PET, and is reconstituted within minutes with nothing but a painful memory to show for it. It leads to a sense of invincibilty and recklessness among netbattlers, giving rise to an environment of Annihilation.

The Acid Hackers and The Net Guardians

The global netcrime syndicate WWW had been twice defeated by Electopian boy Lan Hikari and his navi Megaman.exe. In the final confrontation, Lan and the WWW agents used a dangerous device designed to transmit human brainwaves into the cyberworld, the "Pulse Transmission System". One of Lan's allies was the Sharoan scientist Dr.Cossack, who received minor brain damage due to being attacked in the cyberworld while he was pulsed in with this device. For some time afterwards, Dr.Cossack was feverish and erratic, neatly fitting the stereotype of a mad scientist. It was during this time that he designed the Hybrid program.

Originally intended to bypass navi customization size limits by merging upgrades into the navi's core rather than adding them on at the surface level, the Hybrid had an unpredictable side-effect of irreversibly overwriting key elements of the user's identity as well as completely absorbing the target entity. When Dr.Cossack hired six shiftless teenagers to test the program, they found they could absorb entire navis with the Hybrid. They quickly decided to take advantage of this and effectively stole the identities of powerful navis Punk, Flashman, Desertman, Plantman, Beastman, and Flameman. Joined by the former WWW autonavi Bubbleman, they formed the Acid Hackers, a thrill-seeking band of miscreants armed with the strongest navis around.

Taking responsibility for unleashing the AH onto the world, Cossack put together a mercenary force of netbattlers that he would fund and manage to the best of his ability. Being crazy at the time, this meant grabbing whoever was around in the mall food court and then setting them up in a loft above a donut shop. These young men and women were the Net Guardians, and with their modified version of the Hybrid program, they acquired enhanced copies of the navis Serenade, Yamatoman, Darkman, Kingman, Bowlman, Drillman, and Metalman. Their mission was to bring the Acid Hackers to justice, wherever they may be.

What could have been a brief conflict was complicated by the intervention of Fate -- a shadowy figure that supplied the AH with advanced technology and luxuries for their abandoned warehouse hideout in exchange for their service in stealing special data packets from highly-guarded installations. By the time Cossack and the Net Guardians had discovered the pattern in the AH activities, it was too late. Fate revealed himself as a spy in the NG headquarters (a homeless man squatting in their mess of donut boxes) and turned out to be Dr.Sudba, an old colleague of Cossack's responsible for the creation of Gamma, Sharo's failed submission for the cyberworld template. Fate used the pieces the AH gathered for him to bring Gamma back, aiming to devour and supplant the current "Beta" cyberworld.

With Fate revealed trying to destroy the world as they know it, and with the realization that only navis with the Hybrid stood a chance of fighting Gamma without being absorbed into it, the Net Guardians and Acid Hackers joined forces to put an end to Gamma once and for all. They succeeded, but with heavy casualties. Desertman, Bowlman, Bubbleman, Flameman, Metalman, and Serenade were all absorbed by Gamma during the final battle, and in the end only some of them were partially recovered, with the original Hybrid effects evidently reversed from being broken down within Gamma.

The victory also came with significant contribution from the shady tactics of NG Kingman's operator, Sam Jeffries. Revealed to be a former member of the netcriminal group Viral Infection codenamed "Blackbelt", Sam weakened Gamma by forcing it to absorb a large number of sacrificial navis tainted by the corrput influence of "Dark Chips". Sam then escaped into hiding, but not before assaulting and stealing from his former teammates.

After the Gamma incident, both teams mostly went their separate ways. Cossack shifted his renewed focus to restoring the devastated cyberworld systems of Sharo. Drillman and his operator Moe rejoined the law enforcement agency ONBA to track down and arrest Blackbelt. Plantman's operator Stuart ended up as a low-profile drug dealer in the midwest after running afoul of a dangerous South Ameropean cartel. Desertman's former operator and homeless refugee from another world Nijubu struggled to make ends meet with Kingman, whom Blackbelt left in his possession. Jake returned home and gave Beastman away to an adventurer named Shou. The last remaining Net Guardians David and Jon continue to monitor for Acid Hacker activity with their original navis that used to be Serenade and Metalman. There's not much for them to do though, as the AH were reduced to Jeremy/Punk and Matt/Flashman.

Months later, Moe and his partner Tricia are diverted from the search for Blackbelt by a case involving navis going unrecoverably missing in or near the Undernet. With the assistance of the mercenary Sam Darklight, they investigate and discover the source of the disappearances is a group of new Darkloids consisting of the Hybrid navis thought lost in Gamma -- Desertman, Flameman, Metalman, Bubbleman, and Bowlman.

-After the Gamma incident, both teams mostly went their separate ways.
-Cossack shifted his renewed focus to restoring the devastated cyberworld systems of Sharo.
-Drillman and Moe rejoined the law enforcement agency ONBA to track down and arrest Blackbelt.
-Plantman's operator Stuart ended up as a low-profile drug dealer in the midwest after running afoul of a dangerous South Ameropean cartel.
-Nijubu -- a homeless refugee from another world -- struggled to make ends meet without Desertman. Blackbelt left Kingman in his possession, but the navi did not get along well with his new operator.
-Jake returned home and gave Beastman away to an adventurer named Shou.
-The last remaining Net Guardians David and Jon continue to monitor for Acid Hacker activity with their original navis that used to be Serenade and Metalman. There's not much for them to do though, as the AH were reduced to the unmotivated Jeremy and Matt.

-Moe and his partner Tricia are assigned a case involving navis going missing in or near the Undernet. Kalinka Cossack sends Darklady (now without an operator) to help, but she goes missing herself.
-Kurisu and Icechan are former WWW members that escaped from the evil organization and left Electopia to start new lives in Netopia. Kurisu becomes an Official-in-training under her assumed identity of Hoshiko. Icechan becomes lost in the Undernet during an early exercise.
-Alia is a morally ambiguous private researcher studying Dark Chips. She has gone through several generic navis in her experiments. Her latest navi gets drawn into the same trap as Darklady and Icechan.
-Their attacker is a Darkloid that wants to capture Darklady. They barely escape thanks to the assistance of the Undernet navi Spider. Darklady's wounds are critical, but she uses Hybrid to merge with Alia's navi, resulting in Darklady's body with a new mind loyal to Alia. As far as Moe and Kalinka know, Darklady has gone rogue. 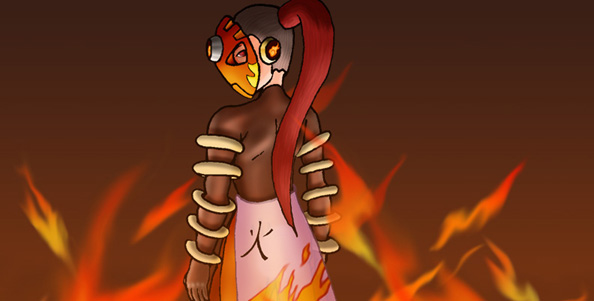 -A mysterious Official named Smith assists Moe in the investigation and follows up on a lead that points to the Acid Hackers. Smith manages to trap Flashman and steal him from Matt while they were searching the Undernet area for Fate. Smith keeps his activities secret from the Officials while unraveling the mystery for his own ends.
-Moe and Tricia join with the mercenaries Sam Darklight and Shademan as well as with the civilian navi Magister, who is looking for her friend among the disappearances. They discover the source to be a group of new Darkloids consisting of the Hybrid navis thought lost in Gamma -- Desertman, Flameman, Metalman, Bubbleman, and Bowlman. The Darkloids lure unsuspecting navis into the Undernet to be consumed or turned into other Darkloids.
-Dark Desert and Dark Bowl capture Shademan and temporarily incapacitate Overdrive. Darklight stays on the assignment without a navi because his experience with Darkloids and Dark Chips is still an asset.
-During the investigation, anyone who gets close to the Darkloids is hindered by the navis Executioner, Archer, Dragoon, and Jester, who work for Queen Majesty and her operator.
-After Icechan escapes from Dark Metalman, the Officials assign Hoshiko to a unit to investigate the incident, not realizing it's connected to Moe's assignment. Icechan is nearly trapped and destroyed again by Dark Flameman, but Spider arrives to help once more. Spider and Icechan defeat Flameman, but he manages to Hybrid Icechan before dying. The resulting navi Flamechick possesses none of the memories or personality of either original.

-Hoshiko goes to SciLab for help with her navi and runs into Darklight, whom she had met before as Kurisu. Darklight separates the remaining Darkloid essence from Flamechick but is unable to restore Icechan or her memories. Hoshiko joins Moe's team while Darklight keeps her secret.
-Spider tracks down Dark Metalman in the Undernet and fights him to a standstill. Metal attempts to use Hybrid at the last moment, but Spider's operator manages to take control of the process, leaving a Darkness-free Metalman with Spider's mind.

-Stuart gets involved when the disappearances cuts into his business. He sends Plantman to Darkloid territory, where Dark Bubbleman is fighting Beastman and Burstgirl. One defeated, Bubbleman tries to Hybrid with Burstgirl, but she somehow purges him of Darkness instead. Completely healed and retaining his memories, Bubbleman teams up with Plant, Beast, and Burst to infiltrate and stop the remaining Darkloids.
-Reports of chess piece trouble in a certain area online divert Moe from the Darkloid case to search for Kingman and Blackbelt. Drillman and Flamechick find Kingman, but learn that he had been with Nijubu the whole time, and that the chess pieces in the reports were from a different navi searching for Kingman. Queen Majesty arrives and abducts Kingman, forcing him to join her court.
-With his backup navi lost and his situation still hopeless, Nijubu decides to do everything he can to find Desertman.
-Darklight tracks down Alia and Darklady and offers to help Alia with her research in exchange for her assistance in the investigation -- a deal that he keeps secret from the Officials. Darklady begins to shadow Drillman and co.