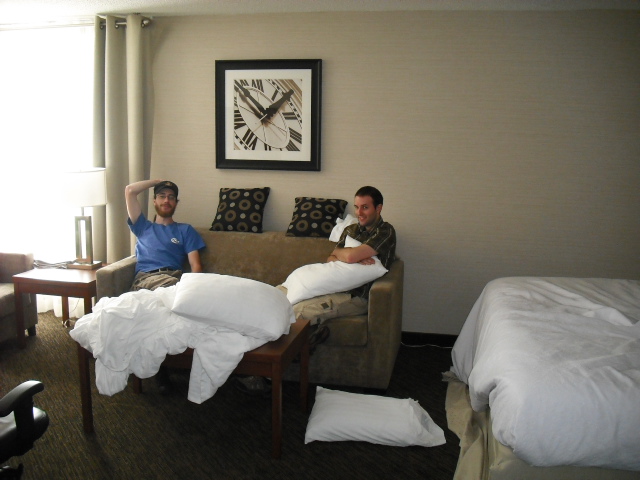 Mechs Meet 2011 passed by relatively quietly compared to previous years. We didn't do much that we hadn't done before and it was all the same people, so to an outside audience it wasn't very interesting or worth making a big deal over. To those of us in the group it was still a fun and memorable time though, and I'm obligated to keep the tradition of summarizing the week's events in this log, so here's how it went.

It wasn't for lack of trying that we didnt get up to new adventures this time around. The original plan was to converge on Topman's hometown of Montreal, but due to various last-minute scheduling conficts it became less viable and we found ourselves back in Gauntlet's neck of the woods in the Toronto area. We're still shooting for Montreal next year though, particularly since mealtime conversations with Topman during the week inevitably led to praise and longing for smoked meat and beaver tails.

It was the ever-reliable group of Gauntlet, Needlegal, Topman, Magnetman, and myself, Snakeman that made it to Oakville this year, along with special guest Gemmy-Ni, Spark-Chan's sister who had previously joined us in 2009's Meet in Frankenmuth. It was a little odd, Gemmy making the trip without Spark, but Classi didn't have her passport so we couldn't bring her along no matter how much we wanted to, and we knew Gemmy well enough by this point that she was more than just a tagalong.

Our first full day there was also the final day of FanExpo, something most of us got sick of from the first couple of Meets, but by now our interest had built back up enough to venture out for one day, the least crowded day, which due to the ceaseless expansion of the venue was as crowded as the MOST crowded day on our first visit five years ago. We could tell something was up as the ticket booths had been moved from a couple floors above the convention floor back to the ground floor of the adjoining building. From there you go up a couple escalators, across a very long pedway crossing an entirely different convention floor, then down some stairs and a few more escalators before finally reaching the actual convention where the people are. There were line markers at least as far back as the stairs, so I could just imagine the lineups stretching back that far on the first couple days of the con. Yeesh.

It was Gemmy's first time at a convention like this, so naturally she spent most of the day waiting in line to meet Tom Felton. He had one of the longest autograph lines and in the hour or so that she waited there it hadn't moved because people with special passes got to keep skipping ahead to the front. She did manage to score a voucher for Felton's photo op session later on, but still had to get in line for it a couple hours early. Her persistence did pay off in the end and she got that photo. Can you believe she only got into Harry Potter recently though?

Gauntlet had aleady been to the convention earlier in the weekend, but still had some purchases to make Sunday, namely a couple of sonic screwdrivers to match the collection he had back at home. Both of these things along with a third at the house had light-up and sound features, and you can bet he made sure to use those to annoy the hell out of everyone for the remainder of the week by pretending to be some incarnation of the Doctor with an irresponsible, obsessive-compulsive need to sonic something every two seconds.

Needle was naturally there long before the rest of us, cosplaying and hanging out with her other convention friends. Despite our best efforts we never could arrange a proper meetup. I ran into her by chance at one point while I was wandering Artist Alley, but in the excitement I forgot to even get a picture of her in costume. We thought we were getting a second chance near the end when she was having a photo shoot in the old-timey train station/brewery across the street, but by the time we got there she was in an out-of-bounds area. Chasing after her got kind of ridiculous, but all things considered, we're lucky the rest of us managed to find each other in that mess, especially considering some of us didn't have phones, or at least the correct numbers for them.

As for me, I made up for my frugal attitude at previous FanExpo visits by quickly buying both the Megaman and Roll Kotobukiya models, which were being offered $70 for the pair at the booth that had them. Sounded like quite the deal, and yet these were things I never would have seen myself coming home with going in. It was amazing I managed to fit both boxes into my bag. Aside from that and buying assorted comics, I got to meet Fred Van Lente, one of my favorite comics writers, who thankfully just had a lonely table in Artist Alley rather than an impenetrable autograph line like Tom Felton or William Shatner. So I got to say hi to him and get an autographed issue of Comic Book Comics (which is frustratingly difficult to get back home) all for just $4 and two minutes. For as much as I enjoy that man's work, that was quite a steal, especially keeping in mind the effort Gemmy needed to meet her own celebrity at the same time.

The rest of the week was mostly the laid-back spur of the moment activities we've grown accustomed to. We made some attempts at bigger outings such as seeing Canada's Wonderland, but tight schedules and indecision often led to us picking the easier option. Topman noticed a trend later in the week that when we would get to planning an outing for dinner or anything, we would argue about it to a point where we all agree on one thing except for one dissenter, and then after some more arguing we would end up doing the thing that the one dissenter wanted to do, leaving everyone baffled as to how we came to that decision.

Not every plan was a failure though. We did get to check out Playdium again, celebrated Topman's birthday with some Cold Stone, saw Conan in theatres, took a walk through downtown Toronto. We did only get to do the last two after half the group had already departed, but still.

We didn't have to butt heads as much over the staying-in activities at least. We watched a few of Top's and Rich's collection of hilariously bad movies (Babylon AD - Vin Diesel's moronic sci-fi epic that ran out of budget in the end, Bloodz vs. Wolvez - vampires and werewolves arguing over land deals in a movie that had no budget to begin with, and Cobra - Stallone's quintessential 80's action movie where neither the protagonist, love interest, or villain's motivations make any sense), played a ton of video games (Megaman 2-5,7,8, Megaman Legends 1 & 2, Wily Wars, Dr.Mario, Marvel vs Capcom 2 & 3, Nintendo 3DS, Turtles in Time (remake), Mortal Kombat (remake), Twisted Metal, Toejam and Earl, Snow Bros., Tekken, and MGS: Snake Eater at various points), and played a bunch of board games (Apples to Apples, Fairy Tale, Shadow Hunters (Mechanical Maniacs Edition), Space Alert, Cutthroat Caverns (second-latest expansion, and at the end of the trip Gauntlet got to buy the latest expansion for next year). We even got to do some actual work for the site, surprisingly. Epilogues incoming.

Amidst it all, we even managed to stumble upon a couple of the old Mechs Meet unplanned traditions:
Trashing the Hotel Room - The fold-out-couch bed was initially blocked by a coffee table that we had to move out of the way. The next morning, as Mags moved everything back, one of the table legs snapped right off just by dragging the cheap thing across the rug. Now we could have taken the easy route, left it as it was, draped a discarded bra over it, drew a picture of Megaman shooting a table on an express checkout form, went home, and wait to see if they'd notice by charging an extra couple hundred bucks to my credit card...but this year we decided to be a little more unnecessarily responsible. Mags bought some wood glue and attempted to fix it. Once it dried, it broke off again almost immediately. He tried the glue again, this time gluing ALL the sides that needed to be reconnected, and it seemed to hold. We tread lightly around the table for the rest of the week regardless. The staff does not seem to have noticed yet. Sneaky? Or did we just go out of our way to fix a problem that was really the hotel's fault?

The Cramped Car Ride - We thought we had it figured out this time. We had Gauntlet's car and Rich's rental and when all six of us were present, we would make sure to split into both vehicles. Yet somehow we didn't account for Needle calling us for a pickup while the other five were in one car driving around looking for a place for dinner. So after killing two birds with one stone by getting dinner at the place we were picking her up, it was time yet again for a cozy trip down the Gardiner Expressway with four people crammed in the back seat. It started in the way we're all familiar from Meets 2 and 4 with Needle sitting on Top, then she tried laying down across Gemmy and myself, which helped distribute the weight, reduced the odds of being spotted by the nearby cops, and gave us more opportunities for off-colour remarks. Sometimes I think one of us must be arranging these over-capacity road trips on purpose, but the closest one the evidence points to is Needle. Hmmm.

Strangely, there's something fun about that destruction and awkwardness that makes me think we should start planning for them just to make sure we don't miss them, but then it just wouldn't be the same. It's amusing enough that these situations inevitably fall upon us regardless.

That's all I got for this year. Tune in next time for more geeky Canadian shenanigans, possibly in another part of Canada for once! 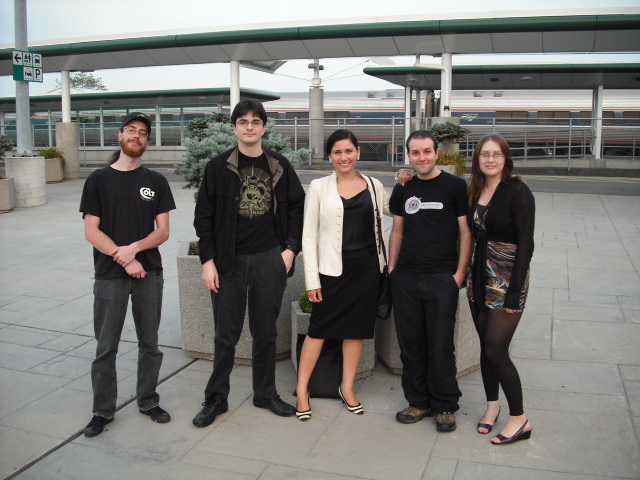