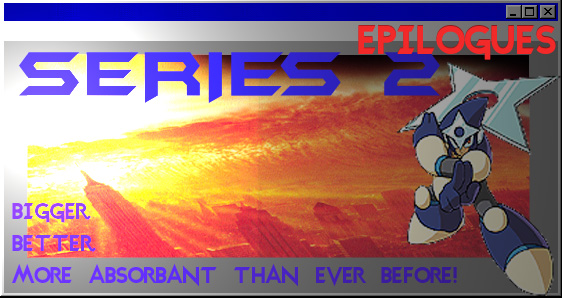 The sequel to Series 1. These were made after one month of Series 1 and they include some ideas that really stuck such as the Technodrome as our base and Bizarro Shadowman. This was also the first time Lennon and Nightmare began writing epilogues and they proved invaluable in series completion. This series also dealt with other issues brought up during Series 1 such as our plans for world domination.

Issue # 1 - And the series begins with Stalkage! - Sparkman has a stalker!? Who could be THAT demented?

Issue # 2 - X-Force Farce! - Has the X-Force gone bad? And what's with Magnetman and his plants?!

Issue # 3 - Gauntlet at the Movies - Gauntlet takes a day to himself, but will he ever get to watch Dracula 2000?

Issue # 4 - The Is No Escape From NIGHTMARE INN! - The Megaman community guest stars as their bus stops in front of a spooky inn. Yikes! Who killed Cody!?

Issue # 5 - Doctor Wily's Revenge! - How will Wily get back at the team? And how the hell does a Scyther fit into all this?

Issue # 6 - The Titanic Tale of Gemini Red and Gemini Blue: Post-Crisis! - The introduction of Nightmare! But will this new Gemini Red be friend...or foe?

Issue # 7 - Geminiman Leaves? - Discouraged at the lack of trust his team shows him, Lennon travels...to the Final Fantasy world? What the hell are you doing with a battle mech, Lennon!?

Issue # 8 - Professor Robot Teaches a Lesson in etiquette. - The evil Sinister Six has new members!? And who's this new Shadowman?

Issue # 9 - Another Bad Day - Sure, the Mechanical Maniacs HAVE Gamma...but where the heck do you keep something that big?

Issue # 10 - GAMMA! - The Mechanical Maniacs try to take over the world by storming the UN!

Issue # 12 - It's a party in my mouth - and everyone's invited! - The Mechanical Maniacs throw a party and invite all their friends and enemies...until someone crashes the party!

Issue # 13 - The non-story with a bad plot and no title! - The IRS comes to steal the Mechanical Maniacs' stolen money! But, wait...is that KING!?

Issue # 14 - The Mechanical Maniacs VS SkyNet - A long-lost epilogue by Magnetman.

Issue # 16 - Ain't Never Had A Friend Like Me! - The Mechanical Maniacs go on an epic quest for... Game Genie!

Issue # 17 - Be one with the name...BE the name.. - Wily conjures up a cunning new device to turn the team into their namesakes! What does that mean? Read on to find out!

Issue # 18 - You Will Be Assimilated - The Borg come to steal all our stuff!

Issue # 20 - Galvatron Returns Part 1 - Galvatron returns to trouble the Mechanical Maniacs! But this time he's COMPETENT! How will Series 2 end? Who will DIE!? Multiple endings, just like in the newest Megaman X games (because we know you all just love being confused about the ending). First part by Lennon.

Can't get enough of our deeds of daring?? Well, why not check out the Sinister Six's epilogues? We guest star there sometimes and their adventures will quench your epilogue thirst!

Ever wonder which epilogue character you resemble the most? Wonder no more! Take the "Which Epilogue Character Are You Most Like?" quiz!