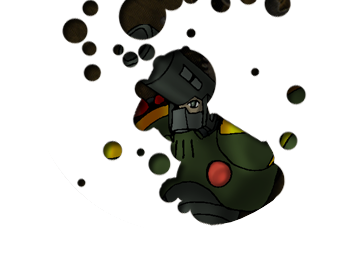 Rockman ??? - It doesn't get much more generic than this.

Rockman - Whhheeeeelllll, here we got another pirate cart! It's got the close-up art, no copyright info, and a "whirlwind manu". Probably a straight port of the original.

Rockman - Yet another pirate Rockman game.

Rockman - Most unusual thing about this is the serial number. What, pirates wanna keep track of their illegal games now? Well, here's a net item of notice - it's the same serial number as the above Rockman 1 pirate! 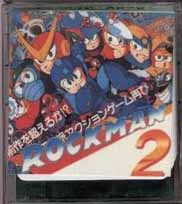 Rockman 2 - On the same site that had the pic of the game had a picture of the box! Note that it's smaller and that it was cut to make it fit. *tsk, tsk*. When Will you pirates learn? I also put the real RM2 cart so you can see the difference between the two. What's with the puke-brown cart? God, it makes me sick just looking at it! Looks like it's just a clone of RM2, but we'll never know.

Rockman 2 - Another RM2 pirate. Notice the alternate colored plastic. "But what makes it a pirate" you ask?? NO LEGAL INFO!! You honestly think Capcom wouldn't put legal info on it's own carts?

Rockman 2 - Well, yet another Rockman 2 cart. Notice that there's no copyright information at all, a dead give away for pirated games!

Rockman 2 - Pretty identical to the one above. Except with no side ridges.

Rockman 2 - More boring carts. Lenmme just say that Rockman 2 is the most boringly pirated RM game I have ever seen. 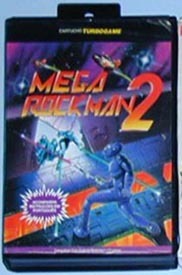 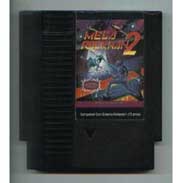 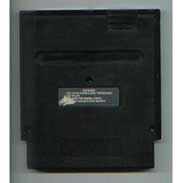 Mega Rockman 2 - There was a ....... Mega Rockman 2?? Well, that seems to be the case. And if it's anything like Mega Rockman 3, it's based off the Rockman version of the game (as opposed to the Megaman version). Submitted by: kristian sulzberger

Rockman 3 - *funtastic fact* the widely circulated Rockman 3 rom is a pirate game! The picture on the left is the real Rockman 3, while the right picture is the pirate game! Notice any differences?

Rockman 3 - Another cart find! Notice the close up of the RM3 box art and the lack of any legal info on this pirate version of everybody's favorite MM game. And, as a nice bonus feature, here's the back! Notice the Ghostbusters symbol on crack. And, hey!, notice how it looks nothing like the REAL Rock 3 cart (as seen below). 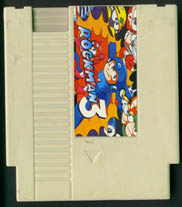 Rockman 3 - Yet another Rockman 3 pirate cart. First I've seen on an American-style NES cartridge though. Well, the art is obviously from the Japanese RM3 game. Notice that there is no Capcom logo, nor did any NES cart actually have this shitty color.

Rockman 3 - Identical to the second RM3 pirate featured in this very section! Could this have been made by the same company? Gauntlet says: "yes"! 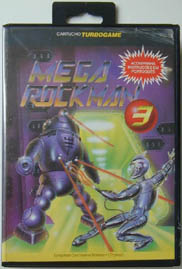 Mega Rockman 3 - Much info about this comes from The Warp Zone, however I got the actual scan from ebay. Turbogames is a Brazilian pirate outfit and it apparently has Portuguese writing on it. So, is this a pirate Rockman 3 or Megaman 3? The answer is Rockman 3. Game text is entirely in Japanese, apparently the game is virtually untouched. Comes with a very official looking NES-style cart (only it's black). Well, it's one of the more interesting looking RM3 pirates, anyway.

Rockman 3 - Oh, gee. How exciting. Just like all the others. The most that can be said about this cart is the markings - note the arrow and lack of indents at the top.

Rockman 3 - Now THIS is a little more interesting! Not only is the box new, but the image is a differently cropped Rockman 3 box art! And look ..... the pirates replaced Rock's constipated grimace with a confident smile! Woo .... I'm all a -tingle.

Rockman 3 - Pretty much identical to every other RM3 pirate I've ever seen except with a cooler box.

Rockman 3 - Better scan of one of the above games. Due to the VAST NUMBER of pirate games with stupid different boxes, I'll NEVER EVER post a box variance AGAIN! I really ought to have come to that decision allot sooner. 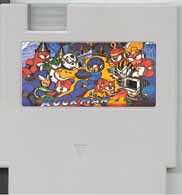 Rockman 4 - A pirate cart for the NES. Notice the close up RM4 box art. If you compare it to the real RM4, it looks nothing like it at all! In fact their NES box is missing the grooves normal NES boxes have.

Rockman 4 - Close up box art marks this pirate. Note that even the logo has been cut off. Sloppy, sloppy, sloppy.

Rockman 4 - One of the less convincing Rockman pirate carts. I'm beginning to think these things are all made by one company since the labels are all cropped in exactly the same way.

Rockman 4 - The orange on this cart and the label make this the most convincing pirate of Rockman 4 I've ever seen. Apparently it does give you 15 lives (as promised on the cart) as well it starts up showing a weird version of the select menu instead of the Capcom logo. Read more about this cart at NES Dedicated. Comes with a warning on the back - rare for pirate games.

Rockman 4 - Slightly different from the others since this one is orange AND has grooves all the way around the cart.

Rockman 4 - Pretty much identical to the majority of RM4 pirates I've seen except with a nifty blue box. What's with the multicolor boxes?!

Rockman 5 - I've actually waited a few years for this game to be dumped! And now Kinda worth it. It's a Darkwing Duck hack( badly done one too), but at least it gives MM some new moves which Capcom would probably develop in, oh say, 20 years time. For some reason MM is yellowish here. And the title is in fact taken from Rockman 4. The cover was swiped from SWATPRO magazine. Of all the ... possible sources. And they altered it somewhat too. Although where that ,,, blue thing in the background comes from, I dunno.

Rockman 5 - Close up box art from the original. Rockman 5 marks this pirate cart.

Rockman 5 - Gee, I wonder how THIS could be identified as a pirate??

Rockman 5 - Now THIS is more like it! A pirate label with attitude. It's rare that a pirate would choose to rip off the American box art but to add a psychedelic background? You can tell this pirate enjoys his work! Unfortunately this seems to be Megaduck repackaged. Oh, well.

Rockman 5 - This is a little more interesting. Rockman 5 with Rockman 4's box art. Probably has the Rockman 4 game in there too. Why would they have such box art nowadays? I have no idea.

Rockman 5 - Clearer image of an earlier pirate ..... but the cart is less interesting so I made this a separate entry.

Rockman 6 - In the spirit of the crappiest Rockman 7 pirate ever comes Rockman 6.

Rockman 7 (NES) - This is the very first RM pirate I ever knew existed! When I saw this I figured if Capcom wouldn't make original games, and we couldn't make original games (cuz we could get sued), messed up pirates were the only thing new in MM's world. Well, that is totally wrong in this game's case! It's just RM6 with a hacked title! But at least they did a good job. Other changes include: eliminating Capcom's company name everywhere and instead of 3 lives you get 6! So, if you haven't played MM6 yet, and don't mind reading Japanese, this game is for you!

Notice the close-up Rockman 6 label art on the cart. It certainly isn't like the real SNES Rockman 7! 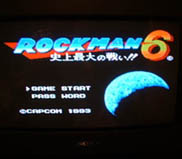 Rockman 7 (NES) - Perhaps the most pathetic attempt at a pirate I have ever been witness to. The images on the cover come from the Rockman 7 manual. I'm surprised this pirate has a serial number. Kevin also sent me a screenshot of the title screen. As you can see the pirates didn't even bother to edit the title!

Rockman 7 (NES) - A better look at the above Rockman 7 pirate.

Rocman X - This is the game where I got those weird MMX sprites. As a game, it really is nothing like MM. Your armed with a slow version of the Ring Boomerang (I like to call it the Roc Boomerang) and when you charge up you can fly across the screen diagonally or vertically. I haven't completed a level, but there are no Robot Masters, no other weapons, and no good music or graphics. If you find this ROM TURN OFF THE SOUND! It's horrible!

I think I may have found the box art to this game. The spelling of "Rockman" is the same, so I think it may belong to this infamous pirate. As you can see it features close-up Japanese MMX art. 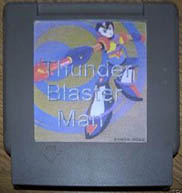 Thunder Blast Man - Didn't know this game made it to the NES, but apparently it did. 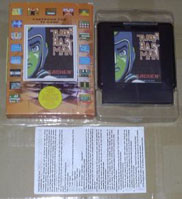 Thunder Blast Man - More TBM craziness. Looks like the label's based off the title screen.

Rockman X3 - Not as bland as the Rockman X2 cart, but it's a rather bold claim. It probably has plain old regular Rockman 3. 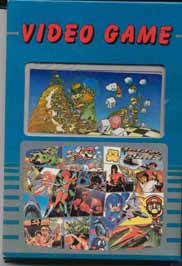 Video Game - For some reason Mega is on the box of a Mario Brothers 3 pirate with a variety of other characters. Typical pirate packaging.