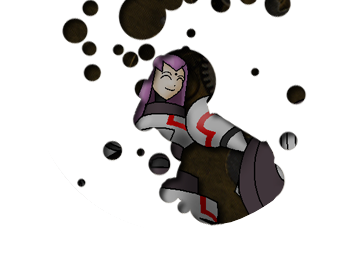 Skull Man can be vary calm and cool at times and then compleatly change his attitude by becoming very agressive. He always is more of a defenceive battler since he has his shield. Thou at other times can become very offencive. Skull Man also dosen't like music much and says " Why waste your money one stupid Music? The only Good music is techno music without words, and even that is a waste of money." He has a interest death, and a strange interest in voodoo rituals. He hopes to become Ruler of the Planet and bring everyone to their knees to hail him.

Eric, Demo, Shinku Kuwanger
bio lost.
Known facts: Eric Pretends to be spastic and cries even when he really isn't, but he doesn't know why he does this.

When angered, Anton will shoot out needles from his head.

Anton is a -little- too happy when he wins for once.

Anton learns alot, and tends to point it out to the rest of the team.

A hidden secret of Anton is that he truely wished he had taken knitting lessons.

loves to sit around wasting life away playing games

"Why do today when you can put off tomarrow... or forever in that matter."

Top Man is a lively and carefree character. Due to the wheels on his feet, he is a fast mover, but he can't jump and frequently falls down staircases.
Top Man has no allegiance to Wiley, but he hates Dr. Light and all of his creations(accept Roll).
He hopes to find the lost elements with which to resurrect Gamma.
He has a secret crush on Mega Man's sister Roll.

Dislikes: People that hate all others with different colored skin, people that think they are above everyone else, retards as in mean people, most vegi's and fruit i said most, being called names, and everything the average person doesn't like

Fears: Dogs big and small, the dark, all gross bugs, dieing, hights and likeing school
What I Like To Do On Weekends: Play The Computer

Spark Man has a shocking personality, and an inexaustable drive for creating odd machines out of junk lying around.

Spark Man has nothing personal against Mega Man, however he has no compunctions for overloading his circuits if nessecary.

Spark Man has a great passion for Godzilla and all other japanese monsters. "Go Go Godzilla!"

"My Spark is worse than my Byte."

Magnet Man has an unequaled hatred for refridgerators

He's never lost, due to the large magnet on his head he always knows which way is north

"If I can't find you, my missiles will!"

Hardman Is also the owner of CMC: Clownman's Circus, What shall be his next identity in his line of wacky characters? (Clownman, Hardman, ????)
His Alternate Online ego is Enigmatic Digital, the Digimon Crazed Walking Puzzle

If there is Italian food within a 5 mile radius, Hardman will Find and Eat every last noodle!

Hardman Loves Japanese Animation (Or Anime if you will) And Collects Posters and Action Figures to prove it! Digimon Rules!

His Biggest Addiction is RPG Games. He Loves them with no acception. His Current Fav's are Wild Arms 1 & 2, The Lunar Series, and Guardian's Crusade

"One More Smartass Comment on my Hardman name and you will get a HardKnuckle Sandwhich!"

Snake Man is a very sneaky and sly character and has the ability to attack from any angle.

Also he has a "hunting" technique built into his systems so that he can always keep track of his prey.

Snake Man is also armed with Search Snakes which have a variety of abilities. Either set to explode on the enemy on contact, or cut it's prey to peices.

Snake Man has no allegiance to Wily, but is good friends with Ice Manfrom the Sinister Six.

Snake Man may seem like a dark character, but has a great sense of humor and always looks on the bright side of things.

Snake Man doesn't own a bar, but he does own a business building computers.

If you need a comp, eMail me! SnakeMan is talented @ programming, game designing, drawing, video games, weight lifting, and a bunch of other stuff...

SnakeMan is working on getting his Doctorate in Mathematics, so you will soon have to call him Dr. SnakeMan (watch out Dr. Wily)!

"You would be a lunatic too if you had to run around wearing a snake costume every day of your life!!... but I guess it's better than being Dolphin Man or Bunny-Rabbit Man."

Spark Man is not too self confident, and thinks that he would be better spending time on things other than defeating Megaman.

Spark Man looks up to the other Robot Masters, especially Top Man.

Spark Man is often forgotten among the others, and often ends up being left behind.

Hardman owns a bar that has, to date, been trashed thirty two times. Why he keeps rebuilding it is a mystery.
Hardman is a big fan of anime, and is particularly fond of Excel Saga
Hardman likes to spend his spare time working out ways to annoy and embarass his adversaries.
Hardman likes to create his own games, but is too stupid to make an original Idea, and far too lazy to actually finish anything he starts.
Visit Hard's Mechanical Maniacs Moments!
Visit Hard's Image Gallery!

"No, the name Hardman does not refer to my preference of Hard Liquor."

FC is a pacifist and tries to avoid fighting as much as possible, although when friends are in trouble she isn't too far behind to help out.
FC is a woman who always thinks before she acts... She always choses to be rational and abides by most rules unless she would see otherwise.
FC has an obsession with cooking, fluffy pink slippers, and mangos. Infact a place she's well known for is a large mango tree just outside Megalopolis.
FC was once referred to as Web Spider from the X-Force.
Visit Spark Chan's Image Gallery!

"People learn from their mistakes."