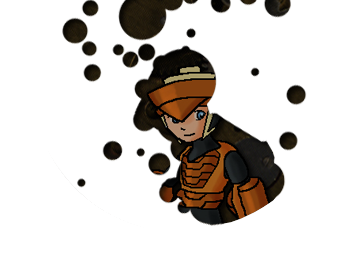 The Mechanical Maniacs vs The Sinister Six - Part 1

Snake: Does he still not have a personality yet?

Spark: I say we don't even give him a personality! It'd just be easier that way!

Spark: This from the guy who wondered if robots could eat oatmeal...

Gemini: Hey, shut it! Some of us are trying to hear the TV...

TV News Lady: -and so in the latest daring rescue, the MM3 Team has once again defeated Galvatron. Unfortunately Galvatron escaped...

Gauntlet: Hey, we didn't fight Galvatron in a loooong time! What's this girl talking about?

TV News Lady: So now, we talk to the leader of the fabulous Mega Man 3 Team called the Sinister Six! Torch man!

Gauntlet: The Sinister Six! They're not Mega Man 3!

Torch: Well, everybody knows Mega Man 3 is the best game out there, so we try to fill the void. With the loss of the Dream Team, we all need to work just a little bit harder.

TV News Lady: So true...but some critics remember another MM3 Team. One with a Sparkman and a Shadowman...

Torch: What can I say? They're just some cheap copies of the real Mega Man 3 Team!

Torch: Everyone knows that MM3 PC is the true MM3 Team. Our team is comprised of 6 elite members! Waveman! Bitman! Oilman! Sharkman! Blademan! and I, Torch man! Together we are the Sinister Six!

TV News Lady: Some critics say that the Sinister Six is a Mega Man 1 Team...

Torch: Well, that was once true. However Iceman disbanded his Team, and we were chosen to take the reigns of command!

Torch: Of course, if anyone wants to challenge us...they can feel free to meet us at our base over in MegaLand! To...talk.

TV News Lady: Well, there you have it! The greatest MM Team of all, the Sinister Six is there to protect you!

(Needle turns off the television in disgust.)

Spark: Yeah, we should go and teach 'em a lesson!

Top: Gotta say I'm with you guys! Now's not the time to duck out, Gauntlet!

Gauntlet: Duck out? In the face of this insult? Never!

(Magnetman and Sparkman combine their powers to create a huge flash of light!)

Gemini: Whoa! That was awesome!

Magnet: Thanks. Me and Spark have been working on that for a while now!

(And so, the Mechanical Maniacs ride out to MegaLand in Gauntlet's stolen Sunfires!)

(Shortly after passing the border into MegaLand, their cars suddenly stop.)

Magnet: Hunh? What gives? Gauntlet, did you do this?

Gauntlet: Man, I duck out of fights once or twice and I get blamed for everything!

Someone: It was me!

(The team turns around.)

Someone: I am the master of electricity and strength! I am Bitman!

Spark: Hey! You copied me!

Blade: Those cars are stolen! So now we gotta turn you over to the cops!

Torch: Now you shall face the TRUE Mega Man 3 Team! The Sinister Six!

Needle: Hey! The Sinister Six is already a team! Get yer own name!

(The Sinister Six raise their hands with a bright flash!)

Gauntlet: Even my shades didn't help!

(Gauntlet uses his Shadow Blades on Torchman! The Maniacs then turn the tables with their superior numbers!)

Needle: Never pick on anybody who's got more backup than you losers!

Oil: You guys are nothing compared to Cossack's Creations!

Blade: Yeah! This is totally wack!

Wave: Maybe we should call our secret members?

Torch: Then come! THE SECRET MEMBERS!

Top: Secret members? Is that even allowed in a team called the Sinister Six?

(Out of nowhere an explosion occurs and a huge form appears...)

Gauntlet: I knew it.

Gemini: Ugh. You did not.

Galvatron: Shut up! Now, my honorary Decepticons and I will destroy you all!

Magnet: I thought you guys were enemies.

Blade: Hah! That's what we wanted you to think! We were only pretending to be enemies, luring the world into a false sense of security! Now, we'll use our trusted status as the Sinister Six to take out the Elite Eight, Cossacks Creations, and the X4 Team!

Top: Wha'd you do with the real Sinister Six!?

Wave: We took them out first since there's only six of them. They're locked in our basement.

Oil: We're sick of being looked down on as rejects. After we own the world, there will be only six Robot Masters! US!

Gauntlet: You think that'll stop us? There's still 8 of us and 7 of you!

Galvatron: We thought you'd see it that way, so introducing our eighth member...

(From a flash of light, out emerges a very attractive girl.)

Spark: Who is she, Gauntlet?

Gauntlet: Galvatron! You bastard! How'd you find her?!

Galvatron: Ahhhhhhhh, welll THAT IS A SECRET!!! NHAH! SEE? I CAN DO IT TOO!

Oil: The irony is just delicious.

Alex Trent: Aaannnnnnnd, I know all of Gauntlet's secrets!

Alex Trent: It's true! Did you know he bites his nails?

Snake: What else do you know?

Alex Trent: OH! Did you know he won't hit a girl? Not even if she's telling all his secrets!

Alex Trent: And he talks in his sleep sometimes too! He dreams of -

(Gauntlet grabs Alex and teleports away!)

Galvatron: Excellent! She will distract Gauntlet so that he isn't a factor in the battle! He defeated me alone 3 times already, so if he was in the battle, I might've had a harder time. However with him gone...

Galvatron: IT'S THE 7 OF US VERSUS THE SEVEN OF YOU!!!

Shark: AND WE HAVEN'T SHOWN OUR TRUE POWER YET!

Magnet: BRING IT ON!

Will the Mechanical Maniacs beat the Sinister six without Gauntlet's help? What enhancements did Galvatron make on the Sinister Six? What other secrets does Alex Trent hold? And what of the real Sinister Six? Find out...NEXT TIME!