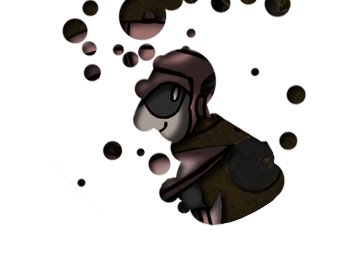 Series 5 Issue # 1 - How the Mechanical Maniacs Met Everyone.

This epilogue takes place not in the present day, but waaaaaaay back in the beginning! The Mechanical Maniacs are still new, poor, and live in an abandoned warehouse on Webpage Street. They are heroes for money, but their secret ambition was to gather the elements needed to remake the superrobot Gamma.

Also note that this is based on an ACTUAL event! A chat, actually with actual people. In epilogue-verse, this takes place after Series 1 # 3, and just before Tale of Two Teams.

It's evening as Gauntlet skulks the streets. After a long day of avoiding actual work, he's set for a good day's rest.

Shadowman: (thought) After a long day of avoiding work, I need some rest!

Someone: Hey, you! You're Gauntlet aren't you?

Someone: From that "Metal Maniacs" team, right?

Shadowman: Uh, that's me. Except we're the Mechanical Maniacs ..... not the "Metal Maniacs."

Someone: Hey! Sorry 'bout that. I'm Ben aka Magma Dragoon!

Shadowman: Ah, from the X-Force, right?

Shadowman: See, I can get your name right.

Shadowman: Yeah, yeah, it's fine. So, what do you want with me?

Magma Dragoon: Well, you're the new team on the block! Me and a few friends are having a party, come along!

Shadowman: Really? Cool. But let's go back to the base and invite the others first. I'll show you around too.

(And so, Gauntlet and Ben arrived at the Mechanical Maniacs' headquarters....)

Magma Dragoon: THIS is where you LIVE!?

Shadowman: Quiet, you. Just go inside.

(And so they go inside.)

Topman: Where were you? We had to do all your chores just to keep this place - hey, who's that?

Needleman: What, don't you recognize my voice?

Needleman: OF THE X-FORCE!

Magma Dragoon: Airman! Right, now I know where I've met you before!

Magnetman: Wait, you couldn't recognize your own TEAM MEMBER!?

Snakeman: Hard's right, you have the worst memory.

Needleman: Hey, you can't even remember what team I'm on!?

(And so, the Mechanical Maniacs head to a small coffee diner where the Sinister Six and others are hanging out!)

Magma Dragoon: Hey, everybody! I brought the Mechanical Maniacs along. They're the new Megaman three team!

Skullman: So, how's things at the Mechanical Maniacs?

Shadowman: (whisper): Actually, I wrote a whole buncha epilogues, but Topman just won't put 'em up! It's been weeks! I don't see -

Topman: HEY! Y'know, it's not that easy!

Topman: If you think it's so easy, why don't YOU try!

Shadowman: Meh. Maybe I will someday!

(Iceman and Snakeman begin to do battle!)

Magma Dragoon: I WANT IN ON THIS!!!

(Magma Dragoon enters the fray and begins to eat Iceman!)

Needleman: So, you really don't have Napster?

Cutman: I don't trust it at all! We're leaving ourselves exposed to attack!

Shadowman: Geez, that IS weird!

Andon: I told you.

Egoraptor: It's true, I saw it myself!

Andon: Go for it!

Andon: That's nothing. I once wore a lock around my neck to symbolize....

Gutsman: *Humph*. Serves you right! Eating people like that.

Iceman: Let me out!

Bombman: There are CHILDREN in here!

Topman: You know, I see everyone from the Sinister Six here except for Fireman. Where'd he go?

Skullman: Woah! These pictures are amazing! Where'd you get them, Gauntlet?

Skullman: What? Oh, common! You GOTTA tell me!

Shadowman: It's a SECRET!

Shadowman: You know, I'm glad things are working out so well! Usually when two "super-hero" ....... "ish" ....... teams meet there's some misunderstanding that makes them fight and then "team-up". But not here. Nope, everything is going very well indeed!

Iceman: (gets out of MD's stomach) Hey, it's Starman and Woodman! Howdy!

Iceman: Hey, hey, settle down now, Starman. He got into the team first, no shame there.

Iceman: Oh, he wanted to start a Megaman Three team of his own, but ..... well, you got there first!

Shadowman: Well, I hope this doesn't turn out too badly.....

Cutman: Hey, Gauntlet! You should get a "Shadowman 024" t-shirt!

Woodman: Yup, I got this neat insult rap machine! Anyone wanna try it out?

Starman: Aw, it's only a joke! Lighten up!

Shadowman: Well, why don't you have it done, eh!?

Starman: Oh, I'd like to! You and me, Gauntlet!

(Starman transforms into a Shadowman!)

Starman: We'll decide who the REAL Shadowman is!

Egoraptor: A battle of Shadowmen!

Shadowman: Oh, all right I guess. Should be fun!

(Starman punches Shadowman across the room!)

Iceman: Um, how exactly is he doing that?

Topman: Grrr...... holograms and hidden guns to SIMULATE attacks he doesn't actually have! I thought I got rid of them, but he must have had some hidden! STOP USING NON-SHADOWMAN ATTACKS, DAMN IT!

Starman: You CHEATER! Fight with some HONOUR!

Shadowman: Ha hah. Ninjas have no honor! All we care about is if the job's done and we'll do anything to do it!

(Starman continues to battle Shadowman using physical attacks, but Shadowman is too sneaky to be nailed. Using a deft move Shadowman dodges Starman and sends him flying to the other side of the room!)

Starman: You're beginning to annoy me....

(Energy engulfs Gauntlet and his hair turns a golden color even if you can't see it.)

Starman: Grrrrr...... THAT'S NOT EVEN A MEGAMAN ATTACK!

(A powerful stream of energy erupts from Shadowman's hands and goes forth against Starman! But in a move that stuns the onlookers, Starman merely deflects the blast away!)

Starman: Hh. Surprised? Well, you're not the only one who can cheat! It's a weak opponent that resorts to form changing in order to beat -

(Starman is hit with a pie in the back of the head.)

Shadowman: Yeah, well, I figured you'd do something like that. I did it to distract you so I could nail you in the back of the head like I did.

(Starman throws a volley of Shadowblades, but they have little effect against Shadowman. Seeing an opening Shadowman throws three of his own 'blades - all of which Starman catches!)

(Within seconds the Shadowblades explode in Starman's hands!)

Shadowman: They explode when caught. My favorite trick.

(Starman falls to the floor, hard!)

Starman: Alright, that's it! I quit! Do whatever the Hell you want!

(Final Fantasy fanfare plays in the background as Shadowman strikes a pose!)

Starman: (transforms to normal) Yeah, some victory. You had to cheat to get it.

Shadowman: I'll take any win I can get!

Woodman: Hey! I wanna fight someone too!

Shadowman: LEARN OUR NAMES, DAMN IT!

(And so, the Mechanical Maniacs return home......)

Geminiman: Ah, what a great day!

Magnetman: I'd have to agree!

Sparkman: YOU LEFT WITHOUT ME!!! HOW COULD YOU!?

Shadowman: Uh .... sorry, sparks. Guess we sorta forgot about you!

(The Mechanical Maniacs turn to see.....)

E8 Gemini: You mother fuckers aren't gonna get away from stealing the Megaman Three team away from us!

E8 Gemini: We made our OWN Megaman Team! With the REAL Shadowman! And the REAL Geminiman! Me! And him!

E8 Gemini: SO, WHAT THE HELL DO YOU GOTTA SAY TO THAT!?

E8 Gemini: YOU LOSERS! NOBODY LIKES YOU! YOU HAVEN'T HEARD THE LAST FROM THE ELITE EIGHT!

Shadowman: Aw, not ANOTHER Shadowman! Geez, I gotta learn the friggin' top spin!

Topman: Oh NO you don't! You are SO not learning the Top-Spin!

Needleman: And we learned something today too...

Needleman: We learned that although you call yourself Shadowman, that won't stop a bunch of other people from calling themselves Shadowman! But that it doesn't matter since you are the oldest Shadowman still here!

Sparkman: Except for the guy who ran the "Shadow Lands". He came before you.

Snakeman: Hm...... I suppose there's been other Snakemen running around too....

Shadowman: Alright, then our mission is clear. To find these impostors and to assassinate them!

Topman: So until Shadowman stops using those god-damn non-Megaman 3 powers, we are ..... The Mechanical Maniacs!