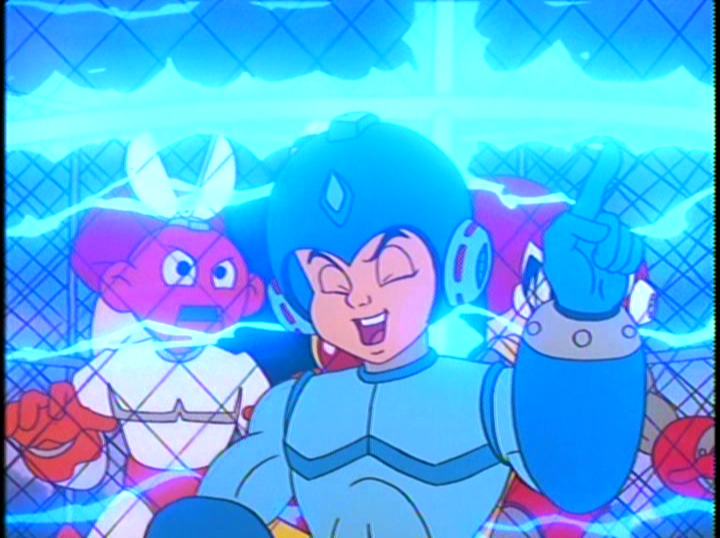 Look out! A power-mad genius and his gang of evil robots are trying to take over the world, and no one can stop them ... no one but Mea Man! He's a young action hero with nerves of steel, ultimate robot body and the power to mimic any weapon he sees for the forces of good.

Together with his sister Roll, and their faithful cyber-pooch Rush, Mega Man jets into battle with fists and plasma-bolts flying! Watch them take on the meanest bunch of bionic friends this side os the future, including the scissor-headed Cutman, the brawny Gutsman, and Mega Man's own robot brother Protoman, who's vowed to turn our hero to the dark side or take him out of commission ... permanently.

Don't miss a minute of all the action-packed fun. Watch the adventures of Mega Man with your family today!

Sizzling Circuits! Most of us have heard about the Mega Man cartoon show, so I won't get too in-depth into the details. But I will be going over the evident influences in production and why it is the way that it is. The prevailing opinion in the fandom s that the show's creators simply didn't know enough about Megaman to make an accurate TV show ... but this couldn't be further from the truth. Many years after the cartoon aired we got to see it's pilots in the form of the Rockman OVAs. The Rockman OVAs and the promo video shown privately to higher ups prove that the initial concept for the series was very close to the games.

While I can't do anything more than guess, I think the finished product is evidence enough to see how the market research came out. Obviously there was a cartoon show made, so the opinions must have been pretty positive. However, it was no longer in an anime style and Mega Man was transformed into an American Super Hero. Therefore I can say that it's likely the opinions tested positively for Mega Man, but negatively towards the Japanese content of the show. Just saying this isn't really enough, you must understand the times.

In the early 90's anime hadn't taken off yet. The biggest shows were Batman: the animated Series, X-Men, and Spider-Man. These shows were probably considered Mega Man's main competition and the show we got falls into line with these shows as opposed to any other shows on at the time. Furthermore, if you watch the OVAs, you'll see that they're preoccupied with teaching foreigners about Japanese culture. An admiral attempt, but I don't think it went over very well as many characteristics that might have been deemed "Japanese" were taken out.

So we got the Megaman TV show we know. They probably went over the first game's manual. Dr. Wily is Dr. Light's assistant in the show and the only place they could have got that information is the first American manual. The original Japanese games don't have Wily as Light's former assistant.

This show was also shown in Japan as "Rockman" as well as in other Asian countries, but it's still considered to be a US property.

The Cast of Characters 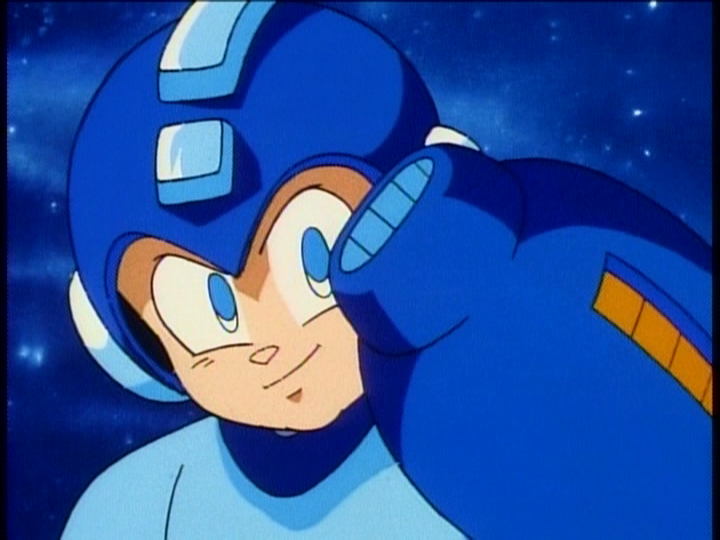 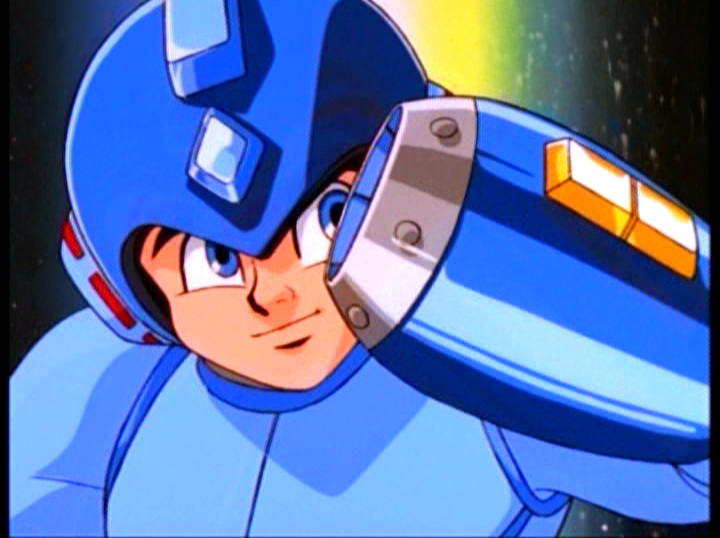 First up is Mega Man. The changes to our robot hero are mostly superficial; he's the typical good energetic and well-meaning kid character in the original OVA and in the US series Megaman is pretty similar. With the following exceptions: 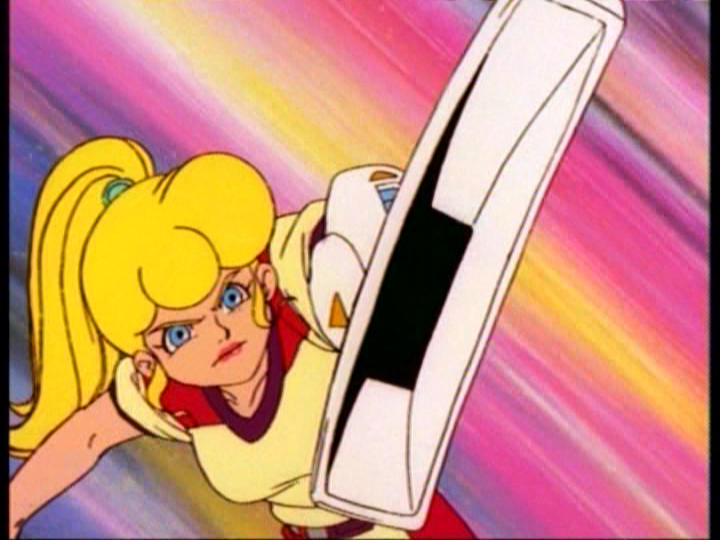 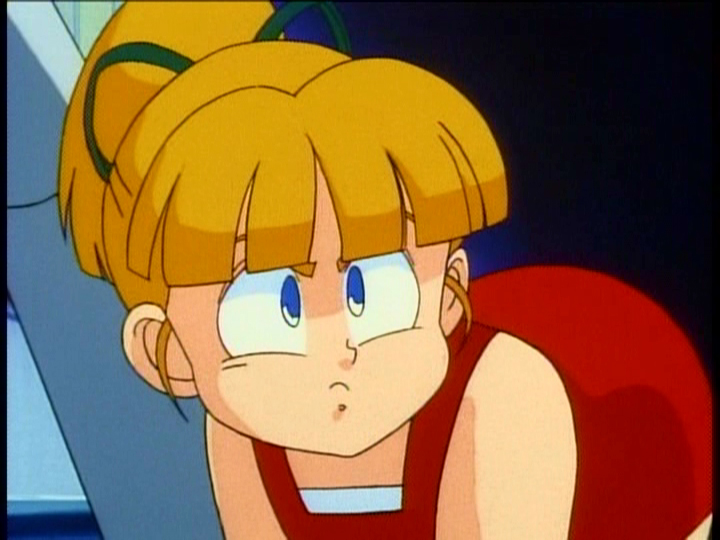 Roll. Megaman's sister. In the cartoon she's always out to prove how capable she is at fighting evil robots, just like Megaman. She sometimes gets in the way in the OVA and I can't help but wonder if this is a change or something that would have happened even if the series was truer to the games. Roll also has an arm attachment like hero brother, which spawns a vacuum cleaner (along with other cleaning products).

All in all, Roll wasn't changed very much, aside from the obvious design changes. 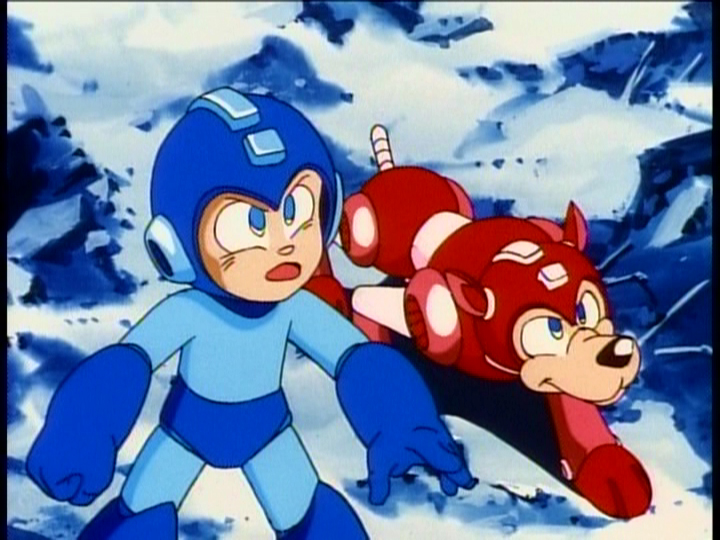 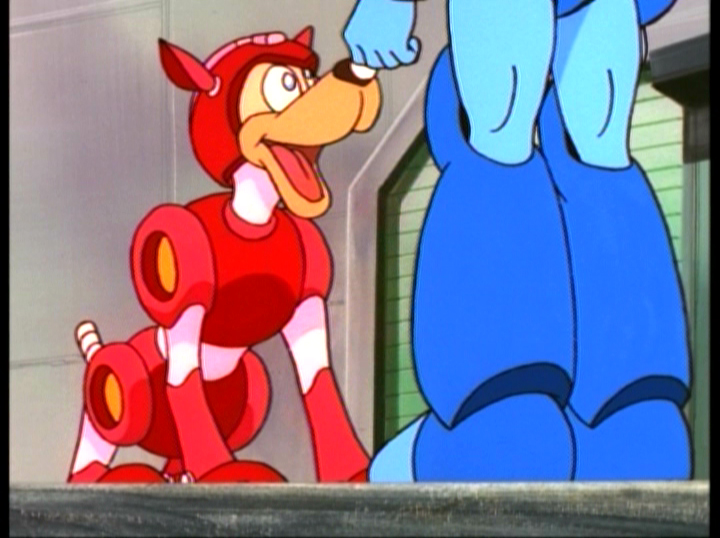 The design for Rush didn't really change much, but his eyes are Americanized. However, there are obvious changes beyond the visual ones. 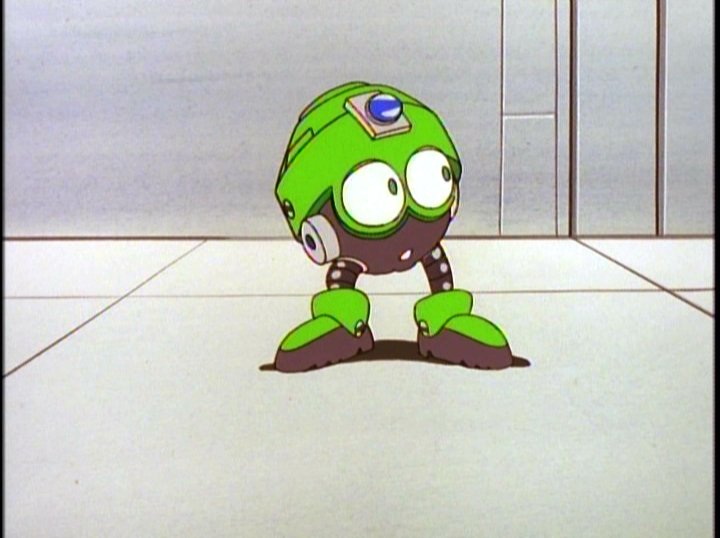 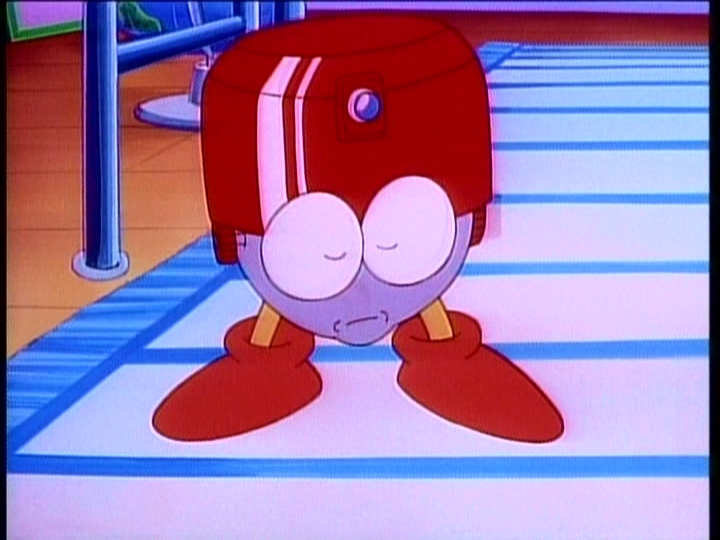 Eddy got a pretty big makeover in the TV series. Along with Roll, he was probably one of the biggest redesigns visually, but his personality and voice are exactly the same as in the OVAs. He was probably made green in order to differentiate him from Rush.

Just to note, Beat doesn't appear in the MMTV show, but he did in the OVAs. Maybe they felt that MM didn't need another robot helper. 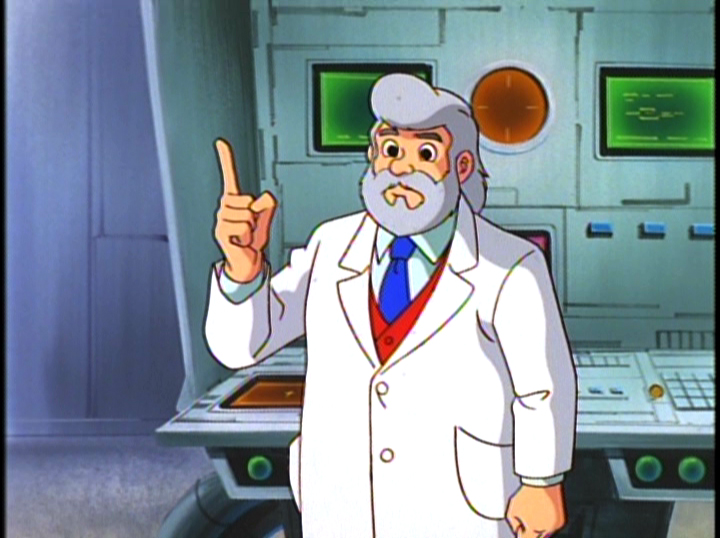 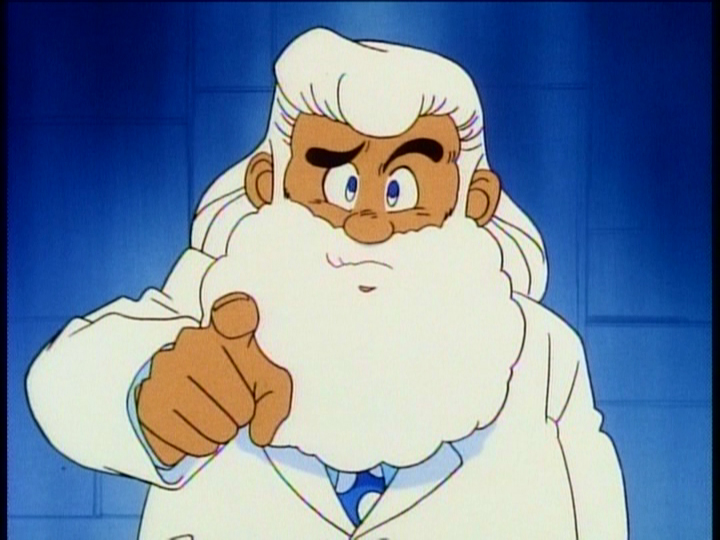 Like Eddy, Dr. Light's changes are mainly skin-deep. His voice and even his mannerisms are the same as his OVA counterpart. He also serves the same functions (as invention-builder and plot-advancer). 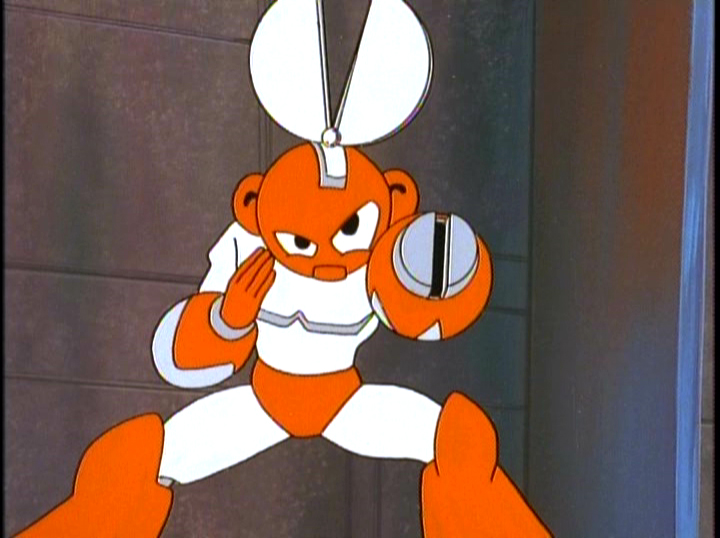 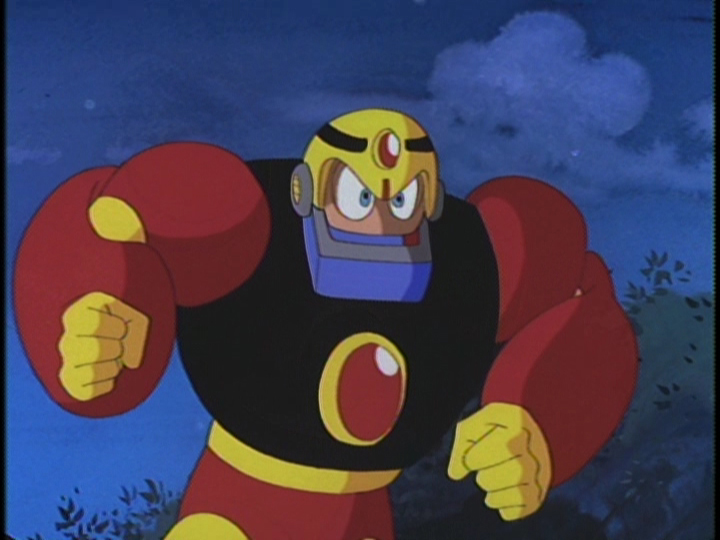 The writers probably felt that Wily didn't get enough help because Wily had two standard henchmen: Cutman and Gutsman. Cutman was a the Egore to Wily's Frankenstein; complete with the accent. They serve as a stereotype in media: the small smart guy and the big dumb guy. Both villains follow the tendency to wisecrack that plagues kids shows at the time.

It's worth noting that the uses of the Robot Masters after MM1 was never explored. It would be quite some time before they were used as robots that were still on Dr. Light's side. Their use as Wily's henchmen isn't really a change in this respect.

Gutsman doesn't really have any changes from his usual design, save for his lower jaw being "steel" colored. Cutman has been modified to look like a physical match for MM, although his large ears show a misunderstanding of the original Cutman design (with both "ears" actually mimicking the handles off giant scissors).

Neither of these robots has known personalities at the time, although Capcom might have supplied information on them. I dunno if their changes personalities count as a real change in this light. 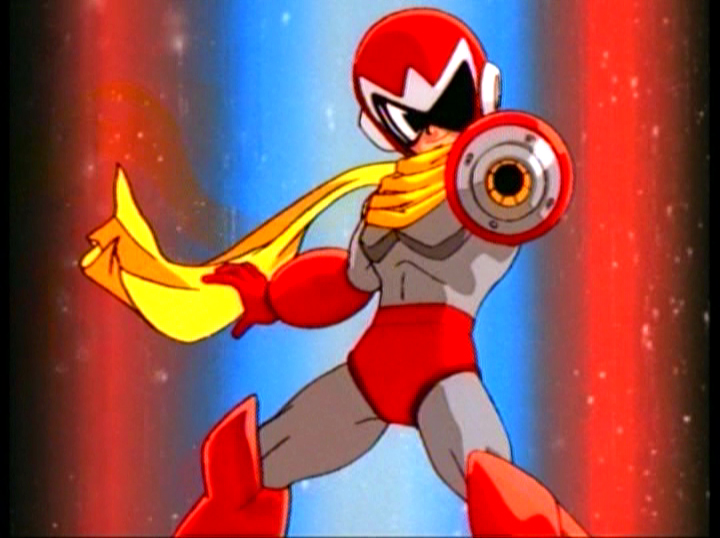 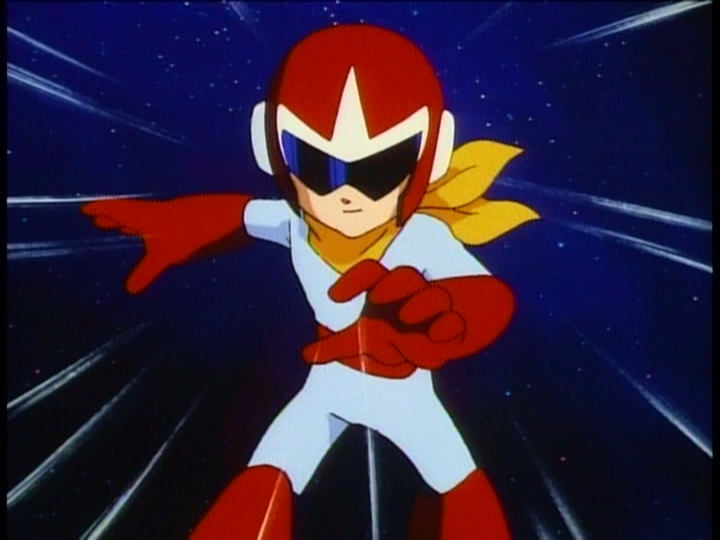 Protoman suffered the biggest change in personality. While his body looks like it was just traced off Megaman's his allegiance switched from megaman's ally into Megaman's menace. However, he's not like the typical anime rival (like, say, Bass). He's more like a big bully. Protoman is definitely on Wily's side, but he shows hesitation when the time comes to finally finishing off Megaman.

Protoman's transformation probably stems from MM3 and MM5. Bass might have been in the continuity by now, but it's important to remember that the notes for the cartoon came from MM5, so MM lacked a true rival. A cartoon takes a long time to produce, so it shouldn't be a surprise to know that their information was behind the game production, especially since they remade it since the pilot.

Protoman also suffers from a continuity error in regards to his origin. Protoman is said to be MM's brother, but the original Protoman was a kid who didn't physically match MM at all. Wily rebuilt him into his current form, which does match MM. It would make perfect sense if the kid-Protoman was adult-sized. He was probably, at one point, but may have been changed as an easter-egg to the games. 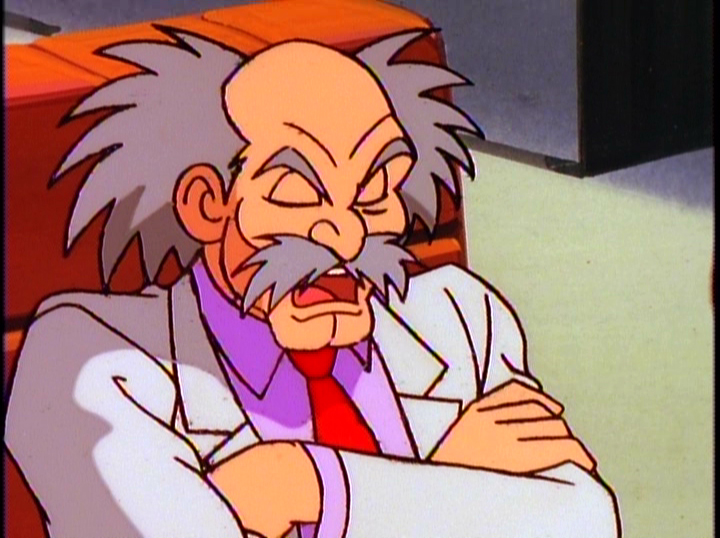 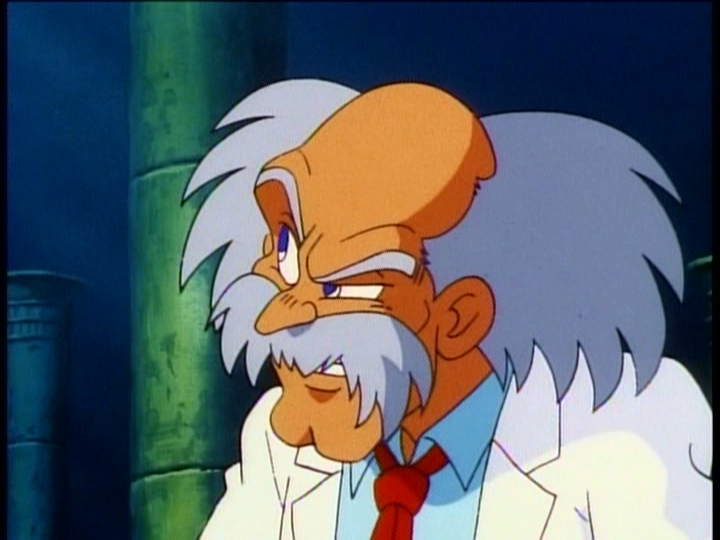 Wily, like Light, is basically an Americanized version of his Japanese counterpart. He's mostly the same except for his voice. For some reason they gave him a pink shirt. Oddly enough Wily also had a pink shirt in Captain N. If the cartoons had remained true to the OVA, Wily would probably have remained much the same.

After examining each character, this cartoon series isn't quite as far off from the games as the fandom's common reaction may lead one to expect. The main differences are mostly superficial design changes and the inclusion of Cut, Guts, and Protoman as villains. Had the OVAs been more successful, the show we might have received may very well have matched the tone and even plot of the show we ended up getting. 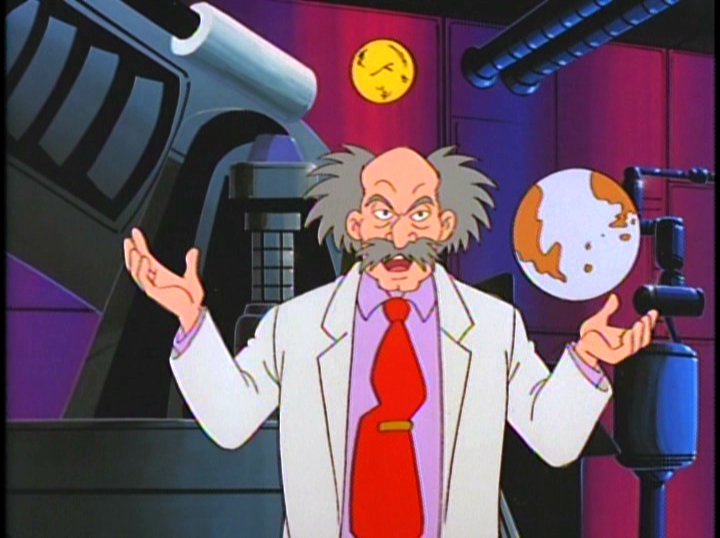 The show is pretty predictable. It's episodic in nature, and has no two parters. The episodes generally revolve around Wily's bids for World Domination with up to three robot masters being shown a s"monsters of the week." The robot masters themselves sometimes relate to the episode ("The Day the Moon Fell" has Shadow and Dark man for instance), but more often than not the appearances are random. The earlier shows have heavily redesigned robots, but it doesn't take long for the robot masters to closely resemble their game counterparts ... even when the design no longer matches the show itself (Gravityman being a prime example of a robot master not matching any of the other characters).

All of these plot points could be considered "Americanization" if only because it shows American writing for the show. However, the show would probably have the same writers regardless of the animation style.

There's a prevailing rumor that Bass was an unproduced toy for this show. However, I've found no photos of this toy. The assumption is that he would have been a major character in the cartoon, however, this too is unsubstantiated. He may very well have been planned as a recurring minor character (like Darkman or Snakeman). 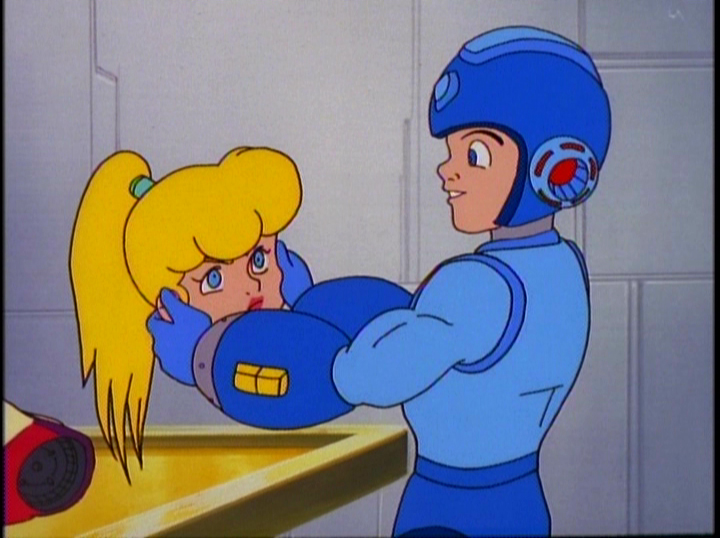 There's a prevailing opinion that the Ruby Spears Megaman cartoon was bad because it ignored game canon. That the writers just didn't know enough about the games to make the cartoon "right." But this simply isn't true. The show was made, originally, very close to the games. Evidentially, it just didn't test well. So creative steps were taken in order to make the show more marketable. This isn't ignorance, this is just the nature of the beast.

I'm not going to go into greater detail over the episodes themselves because other sources go into good enough detail. The best in the entire series are probably "The Beginning" and "Mega X." If you're a fan of Megaman, you'll probably want to watch both of those online sometime.

So it it good? Well, that depends. Do you have a sentimental childhood attachment to the the show? Because if you don't then no. Like many early 90's action shows it isn't that good. The animation is hit and miss; some episodes (like Mega X) are wonderfully animated while others (such as Curse of the Lion Men) are pretty poor. The writing is full of bad jokes and cliches. And there's no overall story. In the end the show suffers from the same overall flaw the OVAs had: targeting a young audience to the exclusion of all others. I have both box sets and I've never watched them just out of enjoyment of the program. It's usually just for the site.

Ironically, if they had waited a few years Sailor Moon and Dragonball would usher in the era of modern anime and the OVAs may have tested much better than they seemed to have done. So who knows how the show would have been like had they waited? In the end, however, the show gives us the longest-running animated look at the classic series Megaman. It features most of the classic robot masters in the entire series as well as some memorable redesigns. While it's not the beast licensed product ... it's certainly not the worst either.