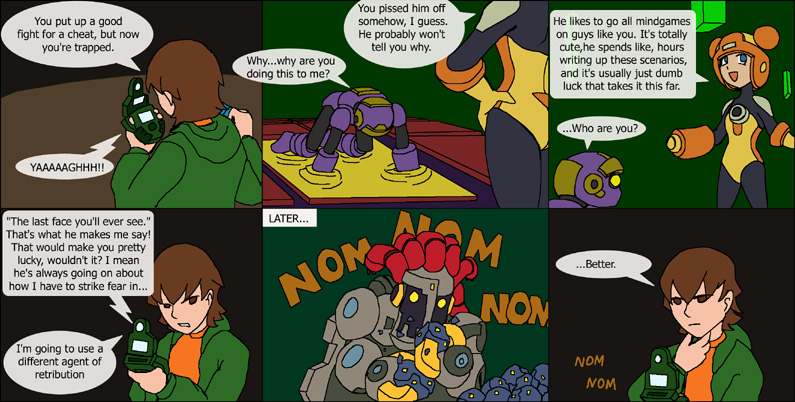 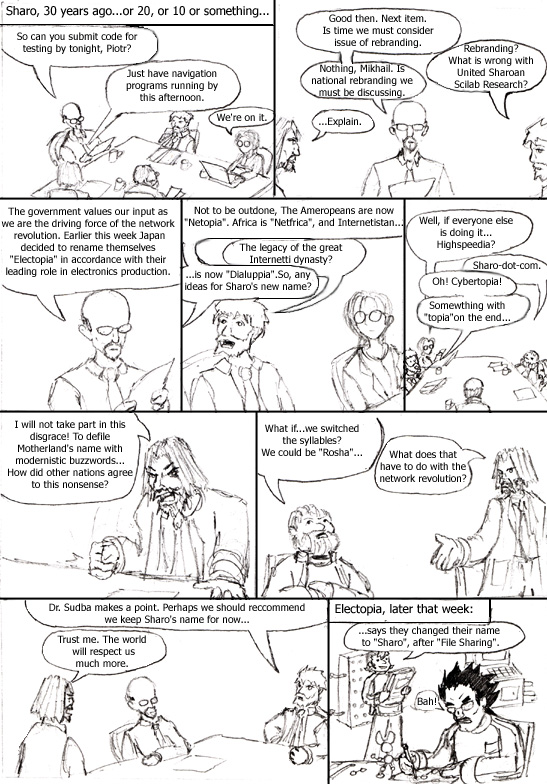 By Nijubu, Drawn by Rai 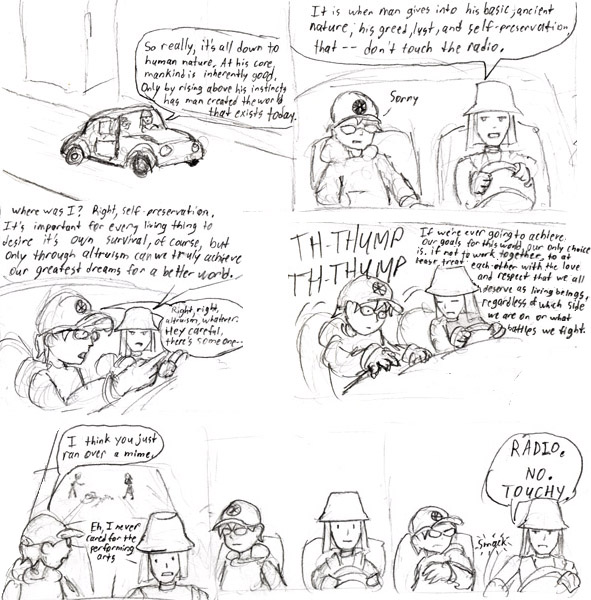 Official1: Could you describe the navi that attacked you?

IceChan: Like I said, he was pretty huge. Big upper-body and large metal fists. Gear-shapes around the wrists, ring-like sawblades sticking out of his back...

Official2: Yeah, that sounds like Metalman alright. What about the navi that intervened and rescued you? Did you get a good look at him?

IceChan: Just for a moment, and there were a lot of flashing lights, but I think he was black...

Official1: And you said he wasn't wearing armor? What was he wearing?

Official1: A navi wearing a suit and tie?

Official1: If you didn't get a good look, you should just tell us, you shouldn't make stuff up.

IceChan: I'm not making anything up! Doesn't this narrow down the suspects on your list?

Alia: Nice one. The last seven hours haven't been a total waste after all. Now head back to the board and we'll call it a-

Alia: Oh come on! Well at least the backup will...no.

Navi: NormalNavi V1 1.0.216 activated. Greeting mode: Hello, my name is <please name your navi using the PET options screen>, what is yours?

Alia: AUGH! Forgot to save!

*Stuart's base. Stuart is listening to Nij's music at cautiously low volume as Nij walks up*

Stuart: Dude, some of this stuff sounds downright evil. Like this fake demonic screaming shit.

Nij: Oh, it's all real. The words weren't written for the human tongue, though, so their pronunciation's pretty bad.

Nij: Like this line here. They put emphasis on the wrong syllables. It should be "Xo'goROTH maNA'kacht azRAkathun..."

Stuart: *Writhing on the floor screaming in pain*

Nij: Stu, seriously, just tell me if you don't like my music.

Gekkoman: Fools, you are no match for me. Gekko-o-o... KOUSEN!

*Gekkoman's crest fires a ray that deletes the navi*

Bitman: Hey boss, I've been meaning to ask. What do your attack names mean?

Gekkoman: It is actually fairly straightforward. You see, "gekkou" means "moonlight", hence my lunar theme. Then "kousen" simply means "light ray". You may think I am only saying simple attack names in Japanese to sound "cool", but bear in mind I am a samurai, so I believe I am warran-

Bitman: Waitaminute, I knew that sounded weird. You got "light" in there twice!

Bitman: You could fire it off a little faster that way!

Gekkoman: You don't understand how attack naming works. Away with you.

Bowlman: Nine members all quitting at the exact same time? How bizarre.

Bubbleman: Yes blub, but don't let it get you down. Let's dance!

David: And now, to mount my horse...and ride off into the sunset.

Jon: I can finally take these damn bowling shoes off. You may wanna spray these extra before giving them to the next guy.

Jeremy: The team's actually goin' on without me!? What's the point? I'm the only entertaining character!

Punk: Get over yerself! It's my spiky bad ass that everyone came ta see!

Metalman: Hey, is everyone forgetting my ass? Come on! Buns of steel!

Naomi: Aww, you all have nice asses.

Matt: You're all so unreliable. I only just quit yesterday.

Flashman: Yeah, after not doing anything or showing up for three years...

Cyros: It's Jon! Why can't the other two have nicknames instead?

Yamatoman: Very well. All good things must come to an end. Only one thing remains to be said...

Carlos: No one can stop Mr. Domino!

Kalinka: But, I find your neck turns me on even more.* kisses neck*

Stuart: You do know we'll be running for our lives if Johnny wakes up...

*Phone rings. Sam picks it up*

Dude on Phone: Is this Sam?

Dude on Phone: Good. I need to hire Shade Man for something.

Dude on Phone: Then help me, dangit!!

Dude on Phone: And you're Sam!

AH Warehouse, Morning. Jeremy walks to the "kitchen" for a snack. Nij passes by, damp, naked, with a towel around his waist.

Nij: Dude, we needa get that shower looked at.

Jeremy: Great, what is it now?

Nij: The water doesn't stay hot for long. I swear, it's like you just get in, and before you know it all the hot water's gone. *Walks off*

Jeremy: Damn it. Good plumbers are damn hard to find. And the whole blindfolding and chloroform deal to keep this joint secret is hard to pull off...ooh, brownies! *Pulls Brownies™ out of fridge and proceeds to stuff face* I'll kick Stu's ass if he put more of his "special plants?" in these...weirdest nightmares I ever had...

Johnny walks by, dripping and wrapped in nothing but a large towel.

Johnny: Hey Jeremy, the shower's on the fritz again.

Johnny: No hot water. *Pads off*

Jeremy: *Walks across the warehouse to the "living room"* First Nij has problems with the shower, then right away Johnny...wait. Wait a...minute. *Thinks* Hey, Matt?

Jeremy: When did we get a second shower put in?

Matt: *Half-attentive* Huh? We only have one shower.

Jeremy: Right. I'm going to go beat this image out of my head now.

Stuart looks down at PET screen.

Stuart: ...What the hell are they saying?

Jeremy: *Giggles* I have no idea!

Stuart: Uh-huh. You need a life. *Walks off*

Punk: An email? Hmm. WHOO! Guys, we got a message from Fate!

The others crowd around him.

Flash: It says his next clue will arrive tomorrow morning, in the form of a limerick.

Flash: Oh, right. Well, it's basically a rhyming joke in the form of a poem.

Flame: Yeah! Like, "There once was a girl from Netucket..."

*The phone rings in the NG apartment. David picks it up.*

Woman: Is this the Net Guardians?

David: Uh yeah. How can I help?

Woman: My navi's pet Spikey ran away! I need one of your agents to find it!

David: Is this a prank? We don't exactly deal in that kind of 'Net Guarding'.

Woman: But your flyer said no job too small,"To serve and protect." "Fees are set."

David: Flyer? How did you get this number? Fees?...Moe! Have you been trying to pimp out the team?

Glyde: Greetings, and welcome once again to Masterpiss Theatre. For your pleasure this evening we present a scene from Shademan.EXE: Dead and Loving It.

A moonlit night in a crypt in the AC/DC Net Cemetary. Megaman and Protoman enter, and look into an open coffin on a pedastal.

Mega: Oh! My poor, poor Roll! How could I let that dastardly Shademan do this to you?

Proto: You're an idiot. Take this.

Mega: What shall I do with this?

Proto: She's not dead yet! She is UNDEAD! She is now a tortured soul trapped between this world and the next!

Proto: You must drive the needle...THROUGH HER HEART!

Mega: Are you insane?

Proto: Yes. *Takes cover behind a pillar* But do it!

Mega: Okay then. And now, my beloved, I set you free!

Proto: *Peeks* What do you expect, she just ate! She's not dead yet, hit her again!

Mega: Again? Are you freaking INSANE?

Proto: Yes, we already established that. And anyway, how much blood can she have left? *Hides again*

Mega: I suppose you have a point.