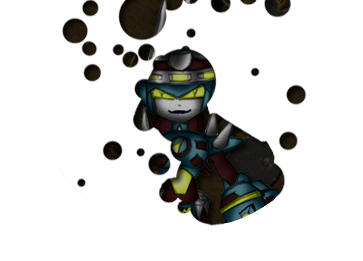 A comprehensive list of official information on the Megaman 3 robots. Some information (Battle Chase info for Shadowman) was obtained from Mandi's Megaman Homepage (link in links section). R&F CD translations were done by a fellow named "Doctor Cain" for a website that no longer exists (I think it was Mega Boy's page).

MM3 platforms - NES, Genesis (Wily Wars), Playstation (will not be listed as separate games).
Power Battles/Fighters - Arcade and Neo Geo Pocket (2-in-one) (I will only list the original arcade game a character appeared in, since this game encompassed both it counts as just another platform to me).

RF CD info:
A mine-working robot. He can break through concrete with a thickness up to 30 centimeters with his weapon, the Needle Cannon.
"I'll make you into a needle mouse."
Good Points: Attacks with super-pointy needles
Bad Points: He has a bad mouth
Likes: Sewing, needle working
Dislikes: Needle shots

RF CD info:
He is a robot who can manipulate very strong magnetic forces. Even though he is a robot, he is concerned about his health.
"Lately, my shoulders have been very stiff."
Good Points: Has a want for control
Bad Points: He has no sense of direction
Likes: Therapy and massages
Dislikes: Floppy disks

PF info: Attack calmly and avoid the illusions. To tell you the truth, Geminiman is weak against heat.

RF CD info:
According to the hologram, he can make a double image of himself. He can reflect walls with his weapon, Gemini Laser. He's a little narcissistic.
"Hmmm, this luster is amazing."
Good Points: He is elegant and graceful
Bad Points: He is very conceited
Likes: Mirrors and shining objects
Dislikes: Snakes

RF CD info:
With the ceramical titanium he is made of, this heavy robot weighs 3 tons. A body press is his special attack, yet he can't gain affection.
"Ahhh, I don't feel like doing that."
Good Points: He keeps his mouth shut
Bad Points: He's a lazy bum
Likes: Sumo wrestling
Dislikes: Swimming

RF CD info:
By having an auto-balancer as an armor, this robot can spin at a very high speed. By having this ability, he can attack very well.
"I'll spin even more than usual!"
Good Points: Good at organization
Bad Points: He's easily elated
Likes: Ice skating
Dislikes: People who stink at dancing

RF CD info:
This robot was made to examine small geographical features. A snake-type missile, Search Snake is his weapon.
"It's no use running away!"
Good Points: He has a cautious life
Bad Points: He is very vengeful and tenacious
Likes: ToadMan
Dislikes: Slugs

RF CD info:
He is a charge operation robot. He could charge two times the powerful energy electricity than ElecMan. He always charges up his friends.
"Ah, no no, you need to correctly line up!"
Good Points: He cares about his friends
Bad Points: Forgetful
Likes: Catfish and eel
Dislikes: Loneliness

PF info: This is a mysterious robot who attacks with Ninjitsu. You could defeat him easily if you had a weapon that shoots vertically.

B&C info:
Car: Shinobi Master (Max speed: 456)
"I blew it."
Shadow Man is one of the few racers whose non-charged attack is arguably more useful than his charged.
Shadow Blade - Chucks throwing stars forward. These things can go through entire groups of obstacles slicing them to bits. If a shuriken hits a racer it will "stick" to him and cause him to slow down for a few seconds. Only one Shadow Blade can be on the track at a time.
Smoke Screen - Creates a large number of puffs of smoke behind the user's car. This can be set off at the same time as throwing a shuriken in some cases.
Ninja Body - Shadow Blade and Smoke Screen
Idaten Engine - Low top speed but decent acceleration
Hayate Wing - Special ability gauge fills up faster
Fuuma Tire - Recovers quickly from spins
Ending - Using the prize money Shadow Man builds himself a little fortress on a cliff and offers 10 million Zennies to anyone who can successfully get through it.

RF CD info:
He is the robot that is created by the model of a ninja. His weapon, Shadow Blade, has a chemical substance on it that screws up mecha.
"Fu, I can see the amazed faces floating in front of my eyes."
Good Points: He's fast at body tune-ups
Bad Points: His thinking ability is very shallow
Likes: Surprising people, scaring people
Dislikes: Boring traps