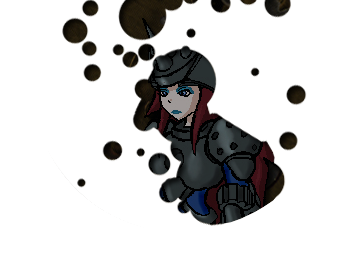 What arthritis-inducing madness is this? A rom hack perhaps? I say thee nay! This is a 100% home-brew remake of the SNES game using NES graphics. But that's not all! The music has been 8-bitted and the sound has been 8-bitted as well. Does this mean we've lost anything?

Evidentially not! The graphics are superb and it's all there. Every stage, every item, every nut and bolt ...

Wait, what's that? There's no bolts in the game? And no Rush Search either? In an effort to make these games more NES-like the following things have been changed:

These changes are somewhat controversial. After all, the Gameboy games had 4/4 stages and a shop feature, so why not an 8-bit remake of RM7. Even though it's in an attempt to bring RM7 closer to it's NES counterparts, it does mean not *everything* was included in this game.

Burstman aka ... the Devil. Benefiting the most from the "no flinching" policy of RM7 NES, Burstman is now super-hard. Also, the timing of the slide is different than the SNES version, so sliding in his bubbles and waiting for them to reach the top (should you get caught) is not a very effective way to get out. You gotta shoot them with the buster (which I didn't know you could do as the sliding thing was my way in the SNES game). There's so much shooting in Bustman's boss fight that my hand almost got a cramp in it!

Another tricky part in the NES game. For reasons that escape me, the holes in the very beginning of Cloudman's level are pixel-perfect jumps while they're easy as pie in the SNES version. What's odder still is this part in Cloud's level. Namely ... that last little jump to get to the ladder. It took me a while to realize it, but you van hit your head on the unseen platform above you, thusly messing up your jump. I've never died as much in Cloud's level before ...

Nevertheless, the game's music and graphics sell it.

For the curious, this is how the sprites compare to the original SNES sprites and the Neo Geo Pocket sprites.

I'd like to think that I'm not quite alone in ... sucking at this game. Or in needing a bit of an "edge". In other words ... here's how to cheat at the game.

Even with the cheats, the game can get pretty frustrating. I cursed quite loudly at Cloud and Bustman .... and that Flying Skull hasn't gotten any easier. The size differences also mean that some jumps might seem odd (you can jump over some Robot Masters you couldn't in the NES game). Still, the NES-feeling is all there. The graphics are superb and .... well, what can I say? It looks and feels like an NES Megaman game. And, as a bonus, all the graphics are unencrypted within the images folder. This means that you can edit them if you so choose. Already, there's several people working on "patches" that allow you to play as any number of characters against any number of characters.

In the end, this is Megaman 7 remade and repackaged ... chances are you're a better Megaman player than I am and won't get too frustrated at the game. This game is recommended for download!

Visit the homepage of the Rockman 7 Famicom team!