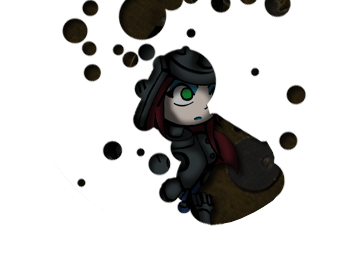 Well ..... yes. But, since the entire game is in Japanese, no one really has had the patience to play all the way through .... and if they had then they certainly didn't have the Japanese skills necessary to actually read the endings. This left the games in Rockman limbo. Well .... until today, that is.

Using my mad skills to obsess and IHZ's (aka PMM's Fireman) amazing ability to read Japanese we have uncovered the TRUTH behind Rockboard's secret ending! And the story as well!

The story is taken right out of Rockman Complete works. As IHZ said, it's not much of a story really... but... it's what it said. It makes sense to the point that the ambitious people require money... but it doesn't make sense as to how a mad scientist bent on evil, a world famous good scientist, a Russian scientist who recently caused trouble for the people, a Robot girl and a 9 year old Russian girl can amount to legally being allowed to turn 4 large areas of land into their own personal board game. But then again, aside from the UN at some points, no one else seems to care enough to interfere with the troubles of the world in 20XX. So it sort of makes sense.

The actual text (since I love to be one of the only MM sites with foreign writing on it, more than anything else):

To be able to fulfill ambition, money is very essential. Let's run about
on a large field supplying funds! Trading, buying and selling plots of
land, bargaining with a rival's....... Surmount distress, increase assets,
amass the world as desired!!

And now that the story, such as it is, has been revealed, we can look into the endings. Now, before we do, it's important to look at the worlds the game has, for each has it's own ending.

With five characters it brings us to a grand total of TWENTY endings! I can't speak for IHZ (who also helped play some of the game) but I can't stand that rockboard music anymore! Although I have become pretty good at the game ..... although I still can't read it.

Without further adu ..... THE AMAZING ENDINGS!!!! All the notes made are IHZ's (since he's the one who knows Japanese not I).

"Alright! With this I brought peace to the Green continent"

"Alright! Everyone became able to live closely and get along well together
on that day"

"Alright! I did it!! By means of this, the world became peaceful!! Phew,
at last I can live carefree wai"

"Fufufufufu! With this, at long last with this people will be able to receive
and appreciate my great inventions!!" *1

"Fufufufufu! The hindrance to my research from people will degrade!!

I did it at last!! With this, I am able to brace myself for study!! I
will overwhelmingly surprise everyone!!

"Ufufu! By means of this, step by step my dream approached wa!!" *3

"Waai! Peace is still number one, don't you think!!"

"I did it! Everyone is being given gladness!!"

"Waai! The hospital came to become very big. After a little more I'll
be able to help the world.

"Waai! Everyone is going to be becoming well!! I will happy to be able
to see many smiling faces wa!!"

"Wahhahha!! The first phase of my plan was a success!!"

"Wahhahha!! Those who do not serve me will not stay!!"

"Wahhahha!! The world is mine!! Mankind will kneel
before my feet!!"

And there you have it. Not much of an ending, true ...... but then again this was from the NES area of games and there wasn't much dialogue in those games anyway. And, finally, the mystery of what the Hell Rockboard is about can be finally put to rest.

*1"Ufufu" is how the Japanese pronounce laughter.

*2 I wasn't sure how to interpret what he means, it's "By means of my research lab, full!!", but I think he is simply acknowledging he will now be busy with work he enjoys because he has money to fund it. This is probably around the time Cossack creates Beat... but he sounds almost crazy, lol.

*3 The wa... it's just something in Japanese some females use, but it's not necessary in the translation. I kept it there though anyway.