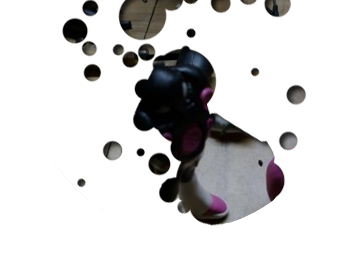 I previously reviewed Tiger's "Megaman 3" game and there isn't too much difference between game and that one. Like the PC games they felt they could skip a game in this release ... in this case Megaman 1. Unlike the PC games, however, the Tiger games are straight recreations of the NES games and not original games in their own right. At the time, there were Tiger games for just about every standard video game and it was understood that they were a pretty cheap marketing gimmick. If the PC games had followed this formula, they probably wouldn't have gotten crap about not having a MM2 PC.

But, even though they were recreations of the NES games, they weren't at all like them.

Megaman is also drawn rather differently in this adventure than in previous ones. Like the box art, this Megaman wields a pistol. Which, I suppose, if understandable. What isn't understandable is that it runs out of energy! Seriously ... WTF? And ... he has a crystal on his chest. Yes, like Heat/Quick/Bubble man in this game. I dunno why they felt it necessary to give him one, but he does have one.

Unlike MM3, MM2 does not have introduction "music". Nor does it sport the items. And, four robots share the same "sprite", so, if it were at all possible, I'd say MM3 Tiger has more obvious polish than MM2 Tiger. Which only makes sense.

Like Megaman 3, this game is covered at Joey's Megaman Corner, so I won't go into hints or anything like that. I will repeat that this game is unlike most other MM games and isn't really for the same type of gamer who enjoys standard Megaman games. The environment is pretty similar, but it requires a bit more of a zen-state to actually finish... and a tolerance for high-pitched bleeps and bloops. 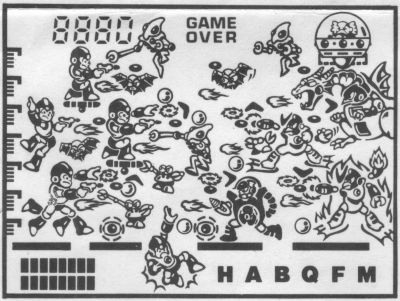 View the "spritesheet" (note: this full view is not accessible within the game itself as it was in Megaman 3 ... I put a scan on top of my scan of the background to give you a picture of how it ought to look)