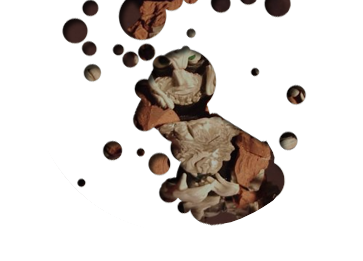 Welcome to the Megaman Star Force Mysteries! A special thanks goes out to the Rockman EXE Zone who let me use an article compiled on their forums as part of my Megaman Mysteries. I'd like to thank Starforce, who wrote the thing, as well as the ones who contributed to his origional article. They include bszelda, the user who uploaded the old trailer to YouTube, Nemomon, mega rock.exe and Synchroman, and Synchroman and DarkRobin for their recreation of Subaru's old mugshot.

Looks like the road at Echo Ridge was different, and the windows at Gonta and Kizamaro’s houses were darker. Also, the dog house was a bit different too.

More beta School, Roads and Subaru's mugshot. Credit to Nemomon for this image. Dialog box arrow was a bit different.

Subaru’s living room was very different: the door leading to Subaru’s room, the TV, the photos and the colors of floor, carpet, table, etc. Also, Amachi's mugshot had red border.

Luna’s mugshot was a bit different. The walls of the school had other design. Capcom's Ryuusei 1 site has an old version of Luna's Mugshot:

The same beta mugshot is used in Boktai DS. DarkRobin and Synchroman recreated the RnR Beta Mugshot of Subaru (the ones on the right).

Different Personal Status screen. Big Wave it's called "SHOP" in the beta version. Probably, even Ken Suther didn't exist at that point. The guy in the beta screenshot says something about Card Force. Credit to Nemomon.

In these scans and screenshots, Subaru meets Warrock in the day... so, Subaru was looking at the stars at day time? Scan contributed by Nemomon.

No background in battles. Maybe that was in a test place like the one MMBN1 beta had?
Early Canon behavious unlocked by MegaRock.exe and discovered on Protodude's Rockman Corner confirm that the canon was supposed to rotate 360 degrees as opposed to it just standing still (as it does in the final).

Different Battle Card selection screen. And… was Gatling1 a Giga Card? Why its card color is red? Also, the Water Wave Card damage was 80 in beta version.

Favourite Cards were marked with a "P", which means it's been powered up by the Wave Scanner and the swiper cards. A feature seen in the final.

Beta Leo Blazer had a whirling ring of fire around it, but not in the final. Credit to MegaRock.exe

In Custom Screen, a Green chip-like thing takes the place of a selected BattleCard. Credit to MegaRock.exe

This image was taken in the RnR trailer. That BattleCard that is next to ParalyzePlus. It isn't in the final.

Beta US game screen shot. Brother cards were going to be called by last name. The screenshot at right is from the final. Reported by MegaRock.exe.

Found by master hacker MegaRock.exe. Like the EXE series before it, Satrforce also has a "test virus". With the use of AR codes for random encounters, MegaRock made appear a Test Virus. When the battle starts, it said to be a Mettenna, but then it converts to Dragon Sky with 1HP. Normal Attacks don't affect it. Can be deleted with BlackHole, but only the HP number disappears, the battle doesn't finish. Also, it always transforms into DragonSky, no matter the game version.

When you set the value in the Random Encounter code to MegaMan, a Fire Leo SF MegaMan appears, the game says that is TaurusFire. He doesn't move, and only uses AntiSword randomly. When deleted, gives GrndWave card.

Dummy People. I guess they failed high school. Searching with an Hex Editor, Starforce found People names (the one they use in transers. Example: Winde Chase, Stelar Hope, etc.). There are many "Dummy Dummy" people names, and there is data for Stelar Kelvin too, but he hasn't any message data. The dummy people has something like "Dummy..... Welcome" as their message, which it's even translated in EUR versions too.

From Mega Rock.exe. Unused letters include a Geo face, Megaman face, elements letters, VS and trade letters, Pegasus, Dragon, and Leo letters, and S,M,G letters. SF1 has the biggest letter choice so far. Why these are not included is strange because it would have been very useful to express words.

Mega Rock.exe has found the 3D model for ACDC Town while ReploidOf20XX has found the textures. It seems that it would have been larger than the normal one and some sort of sewer behind Lan's house. Mayl's house is right over it probably because of an error with the program. He has no idea where the Honda or 7-11 would have gone.

Lan and his house is also in 3D, but missing some textures. The Net has no 3D.

A kid and a Normal Navi can also be found ... likely they were made to traverse normal areas to text interactions between Lan and Megaman respectively.

The green textures are from early versions of BN5 DS. Megaman's textures are the same as BN5's, however the model lookes different.

No textures for these, but models of the Buster, an Area, and a battle grid can be found as well. It seems they stopped short of making the net areas playable.

The textures found in SF1 are definitely from an early 3D gameplay style for BN5DS. It's in the strangest location, as well as having brand names. Also, according to Mega Rock, 2 other files were called "text_ege", but he doesn't know what these are. When they made Battle Network 5 for the DS, they probably wanted a full 3D environment, but didn't produce it. When they made Star Force, they seemed to have built it from their leftovers from BNDS5 rather than start from scratch.

Christian Svensson (someone who works at capcom's) answer:

"Twas before my time at Capcom so I don't know the answer.

There is something you are presuming: that it was ever actually in production just because of the existence of a few assets. This could have been just exploratory R&D/preproduction with no budget associated or greenlight happening (it wouldn't shock me if that were the case). And for whatever reason (maybe from what was learned during pre-pro) that it wasn't put into full production."

Nemomon provides some interesting Scans regarding Ryuusei no Rockman 1. Try to spot the differences! I'm sure there must be some we haven't covered yet!
Star Force 2

BoktaiDS Leftover Cards. Riza, Taiyoujuu, Ankokuken, Toobe and Otofuriito (each one with its V2 and V3). They don't work in battle, and don't have a card picture. Starforce obtained them using AR codes

Looks like Subaru hasn't got his StarCarrier in this Beta Screenshot. Image at right is from the final (Berserk x Shinobi). Llooks like Subaru's smile in Beta version was a little bit different than in final version. Dialog boxes still use RnR1's arrow. In Final version, Subaru adds a "!" at the end of the phrase.

A promo from Shin. Likely left over from the demo version.

Found by Mega Rock.exe (naturally). Perhaps a beta BG for Mu? Also, the BG scrolls right-to-left which is strange considering it is a view-type BG. And the edges stretch occasionally.

Yanked from Sprites INC. No oidea what it means.