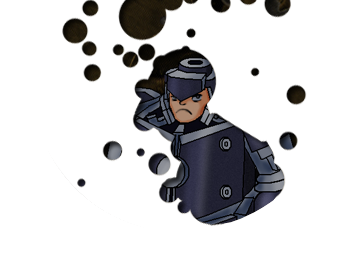 These are the other characters featured in the chronicles and elsewhere. Unlike the main team, they're not represented by anyone real.

The Cossacks
After one of his own dangerous experiments got into the wrong hands, Dr.Cossack formed the Net Guardians as a way to clean up his mess. After the Gamma incident, the Acid Hackers disappeared from the radar, but Cossack keeps his goal in mind and makes sure the remaining Net Guardians are always ready to go back in action if they ever return. He and his daughter Kalinka are currently back in their home country of Sharo helping to rebuild its shattered cyberworld systems, but they stay in contact with their western associates and are in the process of recruiting more agents.

Mr.Famous
Mr.Famous is the boisterous wandering master that seeks out netbattlers to guide them on the right path. He works on behalf of the Electopian Official Center and SciLab. Aside from Punk, he has many other navis to back him up.

Fate
Once one of Sharo's leading network specialists, Sudba lost it all when the creation of the current version of the Cyberworld made his own life's work irrelevant. After that, he dedicated his remaining years to awakening his creation Gamma and consuming network society, absorbing the internet into a world made in his own image. At the end of the line he used a heavily-modified Pulse Transmission System to cast away his mortal shell and be reborn as the powerful navi Fate. His plan failed and Gamma was destroyed, but somewhere his spirit remains intact. Some of the former Net Guardians and Acid Hackers want nothing more than to hunt him down and finish the job.

Gamma
Fate designed an alternate Cyberworld based on the concept of Dr.Hikari's prototype Alpha. This massive self-replicating entity posed just as much of a threat to the world and so its base code was broken up and stored in different points across the world, but it was only a matter of time before someone found them all and linked them together again. Gamma's attempted assimilation of the Cyberworld left Sharo in shambles and caused a lot of damage in the rest of Asina before the combined efforts of the Net Guardians and Acid Hackers stopped it when it reached Netopia. With its core corrupted and finally deleted, there seem to be no traces of this creature remaining...


Monkey?
This powerful legendary navi was based on the Monkey King of eastern lore. Once his power was awakened, it didn't seem like anything in the Cyberworld could stop him, and he lacked the conscience to stop himself from causing utter chaos. Somehow though, Fate tamed him, and eventually reprogrammed him. Now garbed in red armor, behaving much more docile, and possessing no memories of his past, he goes by a new name and serves Fate faithfully. He rescued his master after Gamma was destroyed and neither have been seen since, but with the combined power they wield, they most likely won't lay low for very long.

Chameos Nova and Pharaohman
Cam is supposedly the Prince of another world, but that's what Cam says (and Nij isn't talking). He was transported to Earth unintentionally when the hacker team Viral Infection began experimenting with portals between the physical and digital realms, eventually joining the team until he could find a way home. He takes pride in destruction and wields power over people like a weapon, believing himself the master of everyone's destiny in lieu of fulfilling his own. Fully aware that he's going insane, Cam revels in the mayhem and cackles to himself more often as the days go by.


Trisha Oscar and Overdrive
Trisha is a young woman skilled in jujutsu and various schools of fencing. She was recruited into a special combat unit with the Officials that aimed to transfer those skills to her navi. The experiment didn't pan out, but she got to remain as an Official and her skills still aid her well in fighting crime. She met Moe back when she was first recruited, and again later when he was a Net Guardian, and has since aided the NG cause with whatever resources she could secure from the ONB. Having rejoined the Officials, Moe eventually found himself in a unit under her command. Her navi Overdrive combines high-speed abilities with cutting-type attacks.

The Getsumen Corps
Rivals of Yamatoman. Gekkoman, Poseidonman, Gaia, Infernoman, and Bitman form a deadly group of criminal mercenaries with a grudge against the Net Guardians. Their true allegiances and intentions don't seem to be set in stone, but if they are ever up to something, they're always up to no good.


The Darklight Mercenaries
A group of unscrupulous hired guns that the good guys can at least trust half the time (maybe a quarter). They will do just about anything for someone who has the right amount of Zenny, and many of the former NG and AH have already worked either with them or against them, and in some cases both on different occasions.


Black Storm
A prominent and widely feared drug cartel with a base somewhere in South Netopia, but with arms reaching all over the world. Stuart has done the unthinkable and stolen from them, and to make matters worse, he's profiting from his ill-gotten gains. Knowing the Black Storm, it won't be long before the impetuous youth disappears off the face of the earth, assigned to a horrible torture and death unknown to the civilized world. Knowing Stuart, it might be a little longer before that happens.