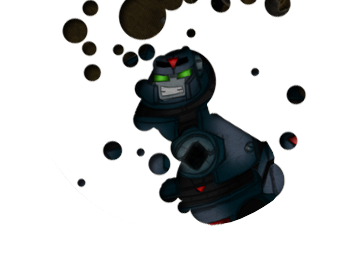 *It was a normal day at the citadel. Jay, Silent Bob, Drill, and Ring were watching every single Star Wars movie made. *

Drill: Okay that was Attack of the Clones. Lets watch New Hope now since Revenge hasn't come out on DVD yet.

Dive: You worship those movies don't you? What's so special about them?

Jay: What's the ****so special about Lord of the Rings?

*So they pop in the DVD and something is wrong*

Drill: Hey wait a minute. Ring look at this. Don't the Stormtroopers seem different? And who is that next to Vader?

Silent Bob: And that's Padme! And why the ****isn't Vader in his outfit? What's going on?

Drill: Leia has been replaced by Bail Organa in the Alliance. The Stormtroopers all still wear the Clone uniform. Something is wrong.

Pharaoh: What do you mean? Someone tampered with the movies? How is that possible?

Dive: Didn't Gary go back and tamper with it? This could have an effect.

Ring: No. It would be a positive effect since they told the Council exactly what would happen after the Red case. All the Jedi would gang up on Palpatine and stop the Clone Wars. My guess is that someone went into the movie and assisted in killing Obi-Wan. Who has that technology?

Drill: I'm going in. Ring, you come too. We need two more guys.

Ring: Maybe we should go to Wily's lab first. He might not be the culprit.

Wily: Lets see. If I attach the proton cannon on his shoulder, will the extra weight slow him down?

Drill: Wily! What did you do to Star Wars?

Wily: How did you get in here? And how did you know it was me who was circulating the Holiday Special of Star Wars around?

Drill: We didn't. But look at your episode 4 movie.

Wily: How could this be?

Ring: Did you give anyone technology?

Wily: Actually I did. I gave some to Forte. He must have changed history!

Drill: I hate to say this but can you help us get into the Star Wars world?

Wily: I request either a Lightsaber or a Clone/Stormtrooper mask.

*Wily uses a machine and the four Comrades enter... Coruscant.*

Dive: So exactly where are we in the Star Wars universe?

Drill: According to my navigator, we happen to be... right where Anakin kills Mace Windu and pledges allegiance to Palpatine.

Ring: At this point Palpatine gives the order to start the purge. Could this be where Forte is?

Pharaoh: Lets go up to Palpatine's chamber. We might catch Forte there.

Drill: No. We will go but we have to let Palpatine win. We have to make sure everything stays the way it did.

Ring: Can we kill Jar Jar?

Drill: That I don't mind.

*They head up, and slip into the room. Thanks to Wily, they now are cloaked*

Palpatine: Young fool. Now you shall know the blindness and ignorance of you pathetic Order.

Mace: Anakin help! You are the Chosen One.

Palpatine: Don't listen to him Anakin. The dark side always overcomes the light!

Anakin: Now I know what I must do.

*Anakin steps over to Windu*

Mace: Good Anakin. We can take him together. I...

Palpatine: Send the signal. Its time to wipe them out.

Drill: This is it. The Jedi Purge. We should sit back and wait this out.

*And they sit back and watch in horror Jedi and Jedi being slaughtered, as well as the death of a certain Gungan. They are currently walking out and see a cloaked figure*

Drill: He's going to Padme's to find out where Anakin went. This is it. Forte is going to be on Mustafar.

Ring: A lava world in which Anakin basically kills Padme, fights with Kenobi, and will be turned into Vader.

*Jay talks through an intercom*

Jay: Hey guys, did you find Wily yet?

Drill: No not yet and it happens to be Forte. The movie is still whacked?

Jay: Yeah. Whoa, we have a major problem here.

Jay: I just checked Jedi and the Emperor is Forte!

Drill: So he took out Palpatine as well. This is bad.

Dive: Lets get to Mustafar right away!

Anakin: I can't believe you Padme! You betrayed me! For that you will pay!

Drill: This has to be the moment Forte shows.

Forte: I wouldn't if I were you Skywalker. But I'll help you with Kenobi.

Forte: You guys? So you found out about my plan to alter history.

Anakin: What the hell are you talking about? How do you know about me?

*Anakin force chokes her and she passes out. Obi Wan brings his lightsaber out and the two duel*

Forte: NO! I can still stop this! Die Oafy Wan!

*All attacks hit Forte, who puts up a barrier*

Forte: That was your best?

Drill: Nope. That was a distraction.

*And it was. Anakin and Obi Wan are fighting*

Forte: No way. You weaklings stopped me!

Dive: Get in the machine.

Forte: I don't want too!

*Ring pushes Forte in a pool of lava... and fishes him out*

Forte (Half burnt and nearly alive): Damn it.

Pharaoh: Put him in the machine.

Drill: Back to Wily's castle we go!

Pharaoh: Another Skull Castle? You got beaten that fast?

Drill: Here is the lightsaber of Mace Windu.

Wily: Its cut in half! Bastards!

Dive: At least Forte is out of the movie... HOLY CRAP! WE FORGOT TO ASK JAY IF THE MOVIES ARE ALL RIGHT!

Drill: Oh no! Forte might have tampered with it some more!

Jay: Guys everything is back to normal, except for one thing.

Jay: There are now Gungans in the Alliance!"

Drill: NO! I said we shouldn't tamper with the universe!

Pharaoh: We had to kill Jar Jar. Come-on lets go back and set things right. Give us the ship, Wily.

Wily: Give me a lightsaber!

*They go back and stop themselves from killing Jar Jar. Jay says the movies are back to normal, and the Gungans are no more. And Wily once again got a broken lightsaber. And that's what happened a long time ago in a movie that has been changed so many times it isn't funny*