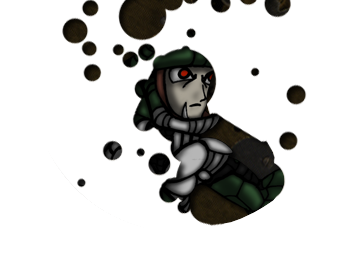 *As they hide from the rabid, stoned annoyance outside, Dante and Virgil flee into a set of catacombs. An oppressive heat and dark red hue greets the crusader and the porn writer, as Dante slams the door behind them closed. Several sections of the tunnel look as though they're falling into ruin, as several yawning abysses open up through random portionss of the hallway. The walls of the seem to be made up of nothing but stone sarcophagi randomly strewn on top of each other. Red fiery blazes emanating inside through upside-down cross-shaped slits on the sides, giving them the appearance of demonic lanterns. Every now and then, a blast of flame erupts from the sarcophagi, accompanied by tortured wailing.

Dante: I can't believe ya didn't tell me there was an easier way across the river! What kinda shitty tour guide are ya?!

Virgil: I thought Medusa didn't show up until we got the Circle of Violence! It was an honest mistake! Besides, that'll teach you to drive a decapitated chariot into my house!

Dante: Am I ever gonna hear the end o' that?!

Virgil: Seeing that's my home for all of eternity, no you're not!

Dante: Alright, alright! Let's just get outta this hellhole! Speaking of hellholes, which one are we in, anyway?

Virgil: These are the Tombs of Heresy. Those who denounced or denied the word of God find themselves trapped in these burning tombs for all of eternity.

Virgil: Don't you have a sin that corresponds to this circle of Hell?

*Dante tries to flashback by looking at the sins painted on the cross sewn to his chest.

Francesco: Dante! I've found irrefutable proof that flying sphaghetti monsters do exist! If my calculations are correct, then they're the ones orchestrating this whole crusade-!

Dante: *whacks Francesco* Man, that's stupid. Even for you.

Dante: ...Nah, that doesn' really go anywhere. Sorry, I got nuthin'. Guess I didn' get 'round ta this one.

Virgil: Oh, great!! Then what was the point of coming down here?!

Dante: Chill! Who says I can' indulge in a little heresy now? There's no time like the present! Let's see what kinda heresy tickles my fancy!

*Dante casually strolls up to a heretic's tomb, pulls it out of the wall and opens it up.

Cavalcante de Cavalcanti: I'm telling you, the Earth revolves around the sun!

*Dante casually throws the tomb down a pit and pulls out another one.

Guido Cavalcanti: The Earth is more than 5000 years old!

Dante: *pitches tomb over shoulder* Still borin'. Who else?

Virgil: I'm sure your mother would be so proud if she saw this.

Dante: *pitches another coffin down a pit* She woulda been if she hadn' died of fever when I was a tyke. There ain't a circle of Hell fer that, is there??

Dante: *pitches another coffin down a pit* Good. I don' wanna catch anythin' while I'm down here. I'll be so pissed if I crawl outta here 'n end up dyin' o' Ubiquitinitis a week later.

Virgil: If you were going to catch anything, it would've been the clap in Lust.

Dante: Makes sense.*throws another casket down the pit* Alright, I'm gettin' bored. This next one better have somethin' juicy.

Farinata: The afterlife is a figment of the imagination! When your life ends, your soul dies with it! Why not live your fleeting life in happiness and bliss?

Virgil: Dante, you know that one's full of crap. You're IN an afterlife!

Dante: Don' spoil this fer me! Say, do ya know a way outta this dump?!

Virgil: What are you asking him for?? You've already got me to guide you through this place!

Dante: Virg, ya haven't had a good idea so far! We've gone through five circles, 'n I got nuthin' outta ya! Yer dead weight, pal.

Virgil: Fine. Have it your way.

Farinata: ...Down the hallway, third archway on the left.

*Dante pitches the tomb over his shoulder down some another abyss and makes his way down the hallway. However, several hours later, Dante's still wandering through the tombs aimlessly.

Dante: I don't get it! I followed that pricks instructions to a 'T'! We shoulda been outta here by now! I'm positive we passed that heretic's tomb five times now!

*Dante pulls the heretic's tomb off the shelf and opens it up.

Graham Jones: What the?? I exist again? Did somebody start Darklight Mercenaries again or-

Virgil: Well, I was going to tell you that the damned here can only see the future but have no idea what's happening in the present. That heretic could've been answering a question ten or fifteen years from now. But since I'm dead weight, I figured I should just keep my mouth shut.

Dante: Aw c'mon! Don't be pissy! Ya must know a way outta here. I mean, ya don't wanna stay down here forever, do ya?

Virgil: Least of all with you. But in all honesty, I have no idea where we are. I don't wander through these tombs for fun, you know. Still, everyone knows that when you're lost in a maze, just keep making right turns, and you'll eventually make it out.

*As Dante makes his first right, the ground beneath begins to shudder.

Dante: The hell was that??

Virgil: It's the harrowing of Hell! It was foretold that Christ's death would forever rock this circle! I can't believe it's starting now!

*The tremors build in strength as the floor explodes beneath them!

Phlegyas: Man, don't your batteries every run out! You guys run way too fast for me! I'm going to rip those yummy little batteries out of you and keep them somewhere safe! Like my gullet!!

Dante: Oh fer the love of-! What the hell are ya doin' here?! We already left yer circle o' Hell!

*Dante and Virgil run for their lives as Phlegyas pursues them, smashing through the tunnels. Dante frantically heaves up a burning casket and throws it at Phlegyas.

Dante: It's either them or us, Virg!!

Virgil: GIVE ME ONE OF THOSE!!

*Virgil starts throwing heretic tombs at the monstrosity, vainly trying to slow it down.

*Phlegyas catches one of the flaming tomb and unwraps it like a candy wrapper.

*Phlegyas messily scarfs down the heretic, tomb and all, and fire starts shooting out of his mouth.

*Phlegyas grabs one tomb after another, messily scarfing them down, like the glutton he is. Meanwhile, Dante and Virgil have already hightailed deeper into the catacombs.

Virgil: You know, I should be worried what's going to become the rest of the heretics if Phlegyas develops a taste for them. But really, I just can't bring myself to be morally outraged anymore by the things you do.

*Suddenly, Phlegyas bursts out of the ground, his mouth full of heretic caskets

Phlegyas: Man, this is the best candy store ever! You guys are so awesome for finding this place! But it's still waaaay past your bedtimes!

*Dante and Virgil keep fleeing down random corridors, still throwing caskets at Phlegyas to buy themselves precious time. But they just keep finding themselves going deeper and deeper into the tombs! Elsewhere...

Fury: All we could find. Everyone else fell into an abyss or got trampled.

Damned: Considering our 'Home' was just another den of torture for sins, I don't consider it a big loss.

Fury: And who do you think Lucifer is going to take this out on? He's going to have our heads for this.

Fallen Angel: ...Either way, if only for this moment, none of this are being actively tortured. Let's just take some solace in-

*Dante and Virgil sprint past the damned taking refuge as Phlegyas follows hot on their heels. The cowering damned try to scatter, but get trampled.

Dante: It's hopeless!! We could be anywhere in this rotten shithole! Fer all we know, we're right back where we started!!

*Suddenly, an imposing half-bull, half-man demon steps out in front of them, blocking their path!

Minotaur: Not so fast! Minotaur no let Dante go further! Minotaur crush Dante for destruction he has caused and killing Minotaur's friends!!

Dante: This is all we need!!

Virgil: No, this is good! The Minotaur stands guard over the Seventh Circle of Hell! If we made it to him, we must be on the right track!

*Dante throws the last bag of weed into Minotaur's face. The Minotaur glazes over as the pot quickly takes effect.

*Dante punches Virgil in the face and snatches the hat off of him. He plops it on the Minotaur's head, after slipping his own jacket on him.

Dante: There we go!! G.I. Hobo 'N Casper rolled into one package! Phlegyas will be thrilled. Now off ya go!

*Dante pushes Minotaur into Phlegyas's oncoming path, and Phlegyas scoops him up.

Phlegyas: Finally! It's about time your batteries ran out, G.I. Hobo!! Better take them out before they wake up again!!

*Phlegyas rips Minotaur open and pulls various innards out he thinks are batteries.

Phlegyas: Don't worry! Those batteries were bad for you!! *looks down at the batteries* But are they good for me? I always wanted to try Duragizers!

*As Phlegyas contemplates eating the "batteries", Dante and Virgil barricade the exit to next circle with various caskets.

Epicurean: ...Well, at least we didn't get thrown down a pit or fed to a slimy monstrosity.

Virgil: You're so lucky that Phlegyas was too stoned to know the difference.

Dante: No, WE'RE lucky. He wanted a piece o' ya, every bit as much as he wanted me.

Virgil: He's not the one you should've been worried about.

Virgil: Any other day of the week, I would've invented a whole new circle of Hell to punish you with if you cost me my lucky hat.

*Virgil reaches into his pocket and pulls out an identical hat.

Virgil: So if you make me lose this one, it's war.

Dante: *putting on an identical coat* Hey, I was pretty attached to that jacket o' mine, too. But seein' as Phlegyas was gonna own us 'N our favorite attires, I say it was a good choice.

Virgil: Just know you won't get that for free again.

Dante: Yeah, yeah. I got it. Let's jus' get the hell outta here.

*Elsewhere, in the lower depths of Hell...

Farferello: But Anger, Dis and Heresey are wiped off the map.

Calcobrena: ...He's already at Violence's doorstep. Should we start evacuating the circle?

Farferello: Evacuate them where?? Since when did hell have emergency exits?!

Draghignazzo: Honestly, I think we can consider any circle he walks into as good as gone.

Barbaracia: We have to do something. If we leave him down here, all of creation could go straight down the toilet, and us with it.

Lucifer: I wish I felt that good right now...But no matter. New plan. If we can't get rid of Dante or his little strumpet, we'll just have find a way to turn them against each other. Follow me.

*Lucifer enter's Beatrice's room. Ignoring the fact she is sprawled out on a lavish, queen-sized bed built the bones of the damned that wasn't there before. He walks up to her and slams a liter bottle of Dr. Pepper in front of her.

Beatrice: Actually, I was thinking I'd rather have some Sierra Mist.

*Barbaracia pulls out a bottle of Sierra Mist and sets it down next to the Dr. Pepper.

Lucifer: Listen, Princess. I'd much rather have you and your trained ape of a husband leave after all the trouble you two have caused. But if you insist on staying, then maybe there's something else you should know about your precious Dante...