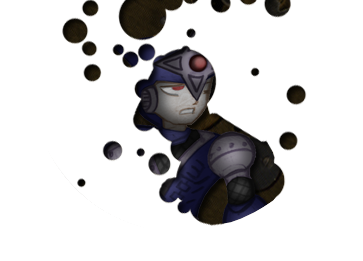 These sprites are either gifts or made by other team member for the Mechanical Maniacs to post on the site.

By Other Team Members

Sprites of Lennon (Geminiman) in his human form!

The Dark Six, by Lennon.

MechaShadow - A Shadowman with the powers of the ENTIRE MM3 team. Made by our very own Geminiman - Lennon

Sheriff Mags - Cutman.exe (Magnetman) drew this because he was inspired at how excited Johnathan (then Magnet) was about his moderator job. Also shown is the work in progress.

Hardman.exe - a sheet by our very own Hardman (Hadrian).

An 8-bit Gamma made by Hardman (Hadrian).

Many sprites from Viral Infection and Void of the Virus and, of course, the Mechanical Maniacs by Raijin K.

A small sprite of the super computor Crorq featuring custom emoticons made for the MM3 forum. By Snakeman (Raijin).

Sinister Six PC and other sprites by Rich (Magnetman)

By Nightmare Zero. The second one was modified by me to reflect my look better.

Gauntlet on a jet animation by Stoneman.

Stoneman's ad for an 8-bit game he was making (never completed). The characters are spoofs of the regulars who used to frequent the old "Ultimate Mega Man Forums".

Couple of animations made by Ryan Quick. I appreciate the effort. Thanks. Original sprites made by Stoneman for all those people who didn't notice.

A Gauntlet plaque made by Zen

Gauntlet with armour in MMX style by Thomas Peters Jr 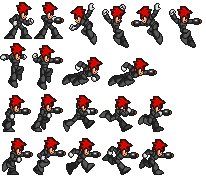 Gauntlet with in MMX style by Thomas Peters Jr

Gauntlet Plushie by Demonic Half Wolf aka IceChan.

A sprite of Gauntlet as part of a series featuring all the old Planet Megaman staff by Egoraptor.

Gauntlet with a Rush Adaptor..... and distorted by a JPEG format. By BCl

Shadowman .... sprite? - Despite the size ....... I'm goin' for sprite on this one. Thanks for the sprite, Jan Manuel Marcano Ortiz

Megaman 3 Costumes - This is a pretty interesting sprite. MM dressed up as the MM3 guys. Gift spriting from John Evers

Mechanical Maniacs Moments sprites - NES sprites recolored to match Hardman's recolors in the 'Moments by Maxell 5 .... he sure does love the 'Maniacs Moments.

Geminiman.EXE - a sprite based off Quickman's version by someone who wishes to remain anonymous.

'Maniacs Moments Shadowman and Magnetman in .... jpg format ..... it's the thought that counts.
By Brian Andres Vivero Garcia 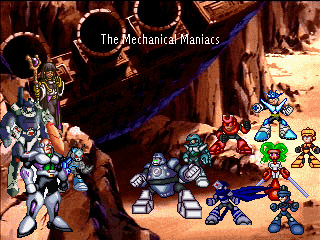 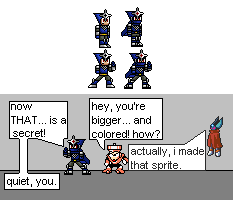 8-bit PC sprites - By Sorrel. Gift sprites based of my own PC sprites!

Shadow Costume - Shadow dressed as someone truly frightening made for an epilogue. Made by Ben aka Magma Dragoon. 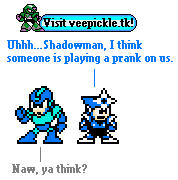 Megaman and Shadowman do a "switch" - by Alex 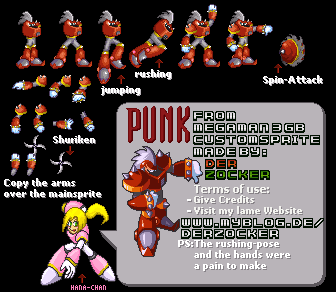 Needleman.EXE (recolored from my own sprite) by Slugger1122 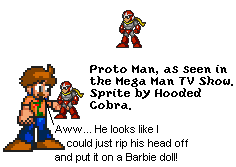 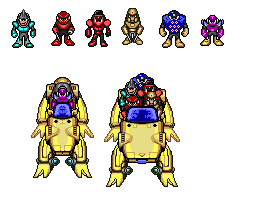 8-bit PC robot masters based of my own versions, by SetaMijoku aol.com.

Shadowman in his Transmetal 2 armor. By Cyros.

A Scissor Joe, from the Business of War. By Cyros.

The Mechanical Maniacs in their "Transmetal 8" armors, obviously inspired by the X series. By Yllisis Zanon.

Needlegal, Magnetman, and Geminiman in their Transmetal 2 armor in 8-bits! By Megaman N.

"The Mechanitoon Maniactrol are the DNA Transmetal Armor created by Bowser, it's a Mix of the Mechanical Maniacs and the Toon Patrol from Who Framed Roger Rabbit..." by Scorch

Mega Man Robot Masters Werewolves II who were modified by their new boss - Bowser. By Scorch.

"After being defeated finally by the Pharaoh Team, the Koopalings founded the Mecha-Maniacs dead, they took to Bowser and Bowser rebuilt they with parts of the Machine Tediz, by changing the number DWN to NBN (New Bowser Number)" by Scorch.

Nice sprites made for the Seven Mercenaries' epilogues, by Naoshi.

8-bit versions of the team as well as a few villains (including some from the Sinister Six) by Geno2925.

"In the Mechanical Maniacs universe, CRORQ developed an eating disorder. For whatever reason, he also decided to weaponize his favourite meal, KFC

I decided to make NES sprites and concepts for CRORQ's two weapons that only appear in The Mechanical Maniacs epilogues. I also made 2 examples on how to put together Gravy Train's graphics. Also MM3/MM8BDM style weapon icons, as I had initially imagined these concepts for the weapons as if they were in MM8BDM

Chicken Buster would shoot somewhat quickly, firing fast moving, gravity-affected, slightly bouncy pieces of chicken that can be one of three sizes. The wing is the smallest, and does the least amount of damage. The breast is the largest and does the largest amount of damage. The leg is somewhere between. The different sizes would be chosen randomly

Gravy Train would essentially operate like the FLUDD does in Super Mario Sunshine, except that it's brown, and more delicious
Also, firing straight up would create a pillar of gravy for taking out enemies from above"

Super Deformed Rockman - From one of the Chinese only Rockman games. Kindly donated by Auto.

Robots Under Glass - by Gauntlet

Sheet of SNES MMX colors and lifebars - by Gauntlet

Clean Megaman Tiger "sprites" - Joey first found these, but I cleaned them up..

A series of lifebars spanning many games in the MM series.

Various Tank sprites I used as a base for my Megaman e-tank font. Sometimes having them all like this is useful.

A near complete rip of Team Shachi's online Rocket Queen game! With various sprites cut scenes painstakingly recreated by yours truly. The only cut scene I couldn't recreate was Megaman going on a rampage since the entire scene is just too dark. I may have got something small wrong here and there, but I tried my best.