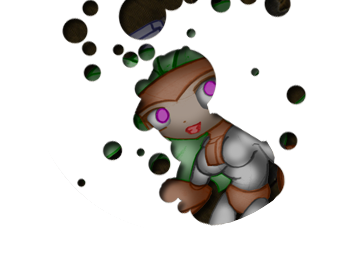 Greetings, all. I decided to run a fun little contest in The Ultimate Megaman Forums (since I hang out there quite a bit). This contest ran a week and had several replies before I closed it and announced the winner! Read the transcript and view the chilling results!

Everyone knows that I'm a sneaky, secretive little mug who rubbs it in everyone's faces whenever given the chance. But a conversation with Magma Dragoon from the X-Force got me wondering exactly how old you all think I am, based on what you know of me.

So how old do you think I am? I might give the winner a drawing of thir character, to modivate you into thinking. But, bear in mind I'll be away this week on vacation and unable to reply to y'all here.

And now, for the responses:

I get the feeling the asnwer'll be "I'm not telling you lot!"

I'd say you're about 16. You seem like a teenager, angry, young, hot-headed. Unrashional, unable to agree to other suggestions.

All in 1 one word, secretive.

PFR Replay (in response to the above):

lol well I think I should guess young so 9 lol

ill have to say 14, mainly cause of the fact that ur ACTUALLY holding this contest...

oh, so you're saying 14 year olds like to have fun.

From my calculated guesses, I've considered the right answer.

I calculated that you are between the ages of 3-100.

I'm gonna go out on a limb here (since everyone seems to think you're young) and say 20 at least.

You've always struck me as mature, intelligent, and ... well-typed? *shrug* Moreso than others, anyhow. :)

And, as an added bonus, I posed the question to TRC in a chat!

So, for those of you that are keeping score, that's:

And now, my response, when I had returned from vacation:

Well, I'm back and am plesantly surprised with how many people got my age DEAD WRONG!

However Replay was the most correct when he said, "I get the feeling the asnwer'll be "I'm not telling you lot!"" Very insightful. This contest was a complete and utter sham. I'm not even gonna give anything away.

During, and after the contest was some people had their own comments:

I here by deem this thread, "Dorkish"

Gauntlet is almost well typed, except he had "bored" misspelled in his sig for as long as I can remember (which is about a year, I guess.)

Oh Fuck you. You won't tell us.

Well, you might wonder why I held this contest at all. It does seem a little pointless, what with there being no winner (despite Replay trying to take credit because he was "most correct") and my age not being revealed.

Well, it is all very simple really. That chat I had with Pyro got me VERY curious as to what age everyone thought I was (since I try very hard to be secretive and mysterious). Knowing that just asking would yield very little (and probably unsatisfactory) results, I decided to trick people into answering. To make people curious I called it a contest and to give incentive for answering my question I provided a prize. I never had any intention of actually giving anything away. It was just to get as many replies as I could and see if my hunch on what most people thought my age was turned out to be correct.

So now my plot has been revealed, and most people think I'm 17. Which is what I figured.