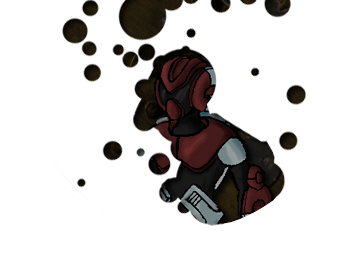 Epilogue 1:
"An introduction- and a bloody boring one too..."

The team are relaxing in their HQ, watching TV- Stone Man is asleep on the couch

Star Man: So... This is our first episode.

Star: Do I detect a hint of sarcasm, Gyro?

Crystal Man: Good grief, Napalm- It's Scooby Doo, it's not as if we don't know the plot already!

Charge Man: Yeah, every episode is the same. There's no originality whatsoever!

Star: I heard that Gyro!

Gravity: Don't worry, heh- I'm in this team, that makes us original.

Gyro: Yeah, and I'll bet that makes this makes good reading too...

No conversation for a minute or so...

Napalm: JUST SHUT UP FOR-

Suddenly there is a sudden knock at the door

Everyone: Wow! That was sudden!

Star: And unexpected- I guess I'd better go and answer it...

Stranger: Hello, is this the...(looks at clipboard) Darkman's Warriors team?

Everyone glares at Star Man- a painful silence follows

Gravity (To Stranger): Yes, we are 'Darkman's Warriors'.

Napalm: Who are you?

Stranger: MWAHAHA! I can now reveal that I am in fact your Arch Nemesis!!!

Arch: But- But everyone needs an Arch Nemesis! You need me- I need you!

Gyro: We don't- Go Away! You're too unoriginal!

Crystal: I don't care about your butt- get out of here!

Arch: I...I... This is SO unfair!!! I spent three bloody years at the arch nemesis college and training center, and nobody wants me as their Arch Nemesis!! I hate this! I hate all of you! Look at me- I'm a wreck! A wreck! (sobs uncontrollably)

The Arch Nemesis continues to wail

Napalm (through clenched teeth): Can somebody shut him up! I want to watch the rest of Scooby Doo.

The Arch Nemesis immediately lights up

Star: Just a 'minor' one though- Nothing too big.

Arch: Can I try and take over the world? Can I? Please?

Star: I suppose so- Just a little bit, though.

Arch: Thankyou!! I'll go and get started right away!! (runs off)

Gyro: Did you have to do that, Star? I really can't be assed to go and fight some moronic enemy!

Napalm: Hey, you kept saying you were bored! This is what you get!

Charge: I wanna sit down- Can somebody get Stone Man off the couch?

Crystal: Have you ever tried to get Stone Man off a couch?

Gyro: Yo- Stoney, Wake up! Space Brain over there just went and got us a flipping Arch Nemesis!

Stone Man (opens an eye): Wha? Bugger. Is it dangerous?

Charge: Not really... He's only trying to take over the world.

Stone: Oh that's nice. Has he had any success yet? The Sinister Six or someone will probably stop him...

Star (smiles): Well actually, I don't think he's that much of a threat...For some reason...

Star: I dunno- I haven't seen him... But we better start the meeting without him.

Gyro: Yeh, it's so unoriginal.

Charge: I know- why don't we be mystery solvers, we could solve peoples mysteries and stuff...

Stone: Shouldn't we be doing something? I mean something more interesting?

Crystal: Like what? It's not our fault that nothing ever happens around here!

Stone: Well, it's kind of my fault, I suppose. I'm writing this epilogue.

Crystal: I can't believe you would write such a boring introduction!

Stone: Well, someone had to do it!

Crystal: But people are going to think that we're boring! You realise they'll never read another of our epilogues again!

Stone: But we are boring! And besides- what makes you think that anyone's actually reading this now?

Star: Sorry Stone, but I have to agree with Crystal- I'm going to end this here, before anything else happens!

Suddenly there is a loud rumble, and something really exciting happens

Napalm: Wait! I want to find out who kidnapped Scooby Doo!

TV: "Jeepers, Shaggy! I never would have suspected it to be-"