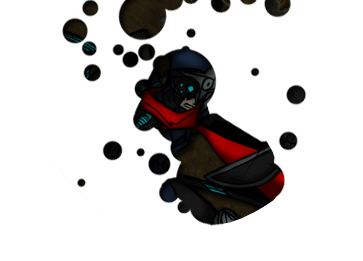 This time, we find the team chained up in a cell, Six of them having just witnessed the death of Mega Man

Star: I thought you guys were going to save me- Not get caught yourselves!

Charge: It's not our fault, Star.

Gyro: Yeah, you were the one who got caught in the first place!

Crystal: Oh- did you get the drinks?

Star: No, I did not get the bloody drinks!!!

Gravity: Listen... We're all feeling a little testy, so-

Napalm: You know I hate it when you guys fight! It makes me all scared...

Gravity: I think everyone is stressed because of the trauma we've just been subjected to...

Star: You- Trauma? I'm the one who's been locked up in here for the whole day! No-one but sleazy politicians to talk to!

Al Gore: I resent that!

Gravity: Whichever evil guy is in charge of this...whoever it is- they just killed Mega Man.

Star: WHAT?! That's impossible! What kind of moronic idiot would do that?!!

Crystal: Well, he is the source of all our publicity! Or rather, was...

Star: That's terrible! I can't believe it! Why didn't you guys save him?!

Gravity: Star, you're hysterical! It wasn't our fault! The best thing we can do is to try and get out of here.

Star: I suppose you're right... listen, I'm sorry for being such a fool, it's just that...

Napalm: Hey, don't worry about it man. We're all stressed out, and that was a sudden shock...

Stone: I've been thinking... who could be behind all this? Not Wily...he's too stupid...

Crystal: Hey! You don't suppose it's our Arch Nemesis do you?

Star: That little shrimp? I doubt it.

Star: Well, for a start, he's sitting over there...

Voice: With no hero to save them, all the world will be forced to give in to my demands!!! Okay, I'm done gloating...

The hostages begin talking nervously, and some of the politicians start betting on when the world will end

Star: We must do something!

Crystal: Why? To avenge Mega Man's death, and save the world?

Star: No- because that evil bastard has gotten me really pissed off!

Star: We all have super powers! We can stop this menace! But first we must escape...

Star: Sure you do- you can transform into a small pile of ston- Oh, I see your point.

Stone: How come I'm the only one amongst you without any super powers or natural weapons? Neither does Charge man, I guess..

Crystal: Well... he can do good train impressions...

Stone: It just doesn't seem fair. (pause) I know! I may not have any super powers, but I can go and get my gun!

Stone Man gets up, all his chains snapping, and runs straight through the wall, creating a massive hole...

Star: Well that solves one problem... Now how do we get out of these chains? (focuses power)

A couple of minutes later, Star Man has released the rest of the team...Except for Napalm Man, who insisted he wanted to release himself...

Gyro: GOOD GRIEF, MAN!!! You killed all the hostages!

Arch: So am I!! This proves that I am ready for world domination! MWAHAHAHAHA!!!

Politicians: What about us? Aren't you going to release us?

The team run outside, determined to stop the dreadful news from being told

Gravity: Something's been bothering me...

Star: Those massive wing things on your shoulders, right?

Crystal: You need to go to the toilet?

Gravity: No. It's something about this plot... there's something wrong... but I just can't think what it is...

Star: We must get to the TV station... lets take the van!

So they all catch a taxi

Crystal: I don't know how we all fit in this thing...Lucky Stone Man's not here!

Crystal: I never knew he had one. I'm surprised he hasn't shot anyone with it.

Taxi-Cab Driver: Right, here you are. That'll be 95 yen, please.

Charge: But we're not in Japan!

Taxi-Cab Driver: Actually, you're just a train. I don't think that qualifies as a super power.

Charge: ARRG!! (Charges into taxi, knocking it over)

Our six heroes march into the TV station, easily avoiding the Security Guards and CCTV systems

Crystal: This seems too easy...

Receptionist: Hello, Welcome to TV Center 455 how may I help you?

Star: Er, We are here to stop the evil madman.

Receptionist: I'm sorry sir, but I don't know what you are talking about.

Gyro: You know, the one who was on the urgent news flash!

Receptionist: Let me see...Our last urgent news flash was almost 3 weeks ago... and it involved seven skeletal-chickens invading a supermarket...but no evil madman.

Charge: Surely you know who we're talking about! He said he took over this TV station!

Receptionist: This TV station is publicly owned- It's not possible for anyone to take it over. That's why we only air crap shows like Scooby Doo, and-

Star: Forget it guys- The evil dude must have been bluffing... but why?

Gravity: If I could just remember what it was!

Crystal: Okay lady, what is it?

Receptionist: I'm not a lady! I'm a man! What makes you assume all receptionists are women?!

Receptionist: Okay then, I'll feed the news flash through... and here it is: 'An upturned taxi is causing the flow of traffic to slowly grind to a halt. The driver claims that he was attacked by a train with arms and legs. It is believed the driver may possibly have ingested some hallucinogenic-'

The team head back to where they originally witnessed Mega Man's death...

Crystal: Well, no clues here. Maybe we should just head back home...

Gyro: Yeah, he was standing just here- and then his head like, just exploded...

Charge: This voice was saying stuff about eternal pain and-

Napalm: What? Tell us!

Gravity: It's so simple! Mega Man is a robot!

Star: You're right. It is simple. Unfortunately, also entirely irrelevant!

Gravity: No! I mean- If he's a robot, then why was there so much blood when he died! He shouldn't have bled at all!

Crystal: You're right! There wouldn't have been more than a bit of oil, and some colourful sparks!

Gravity: Exactly! So that means that, whatever died here- it wasn't Mega Man...

Mega Man: And it might not have even died...