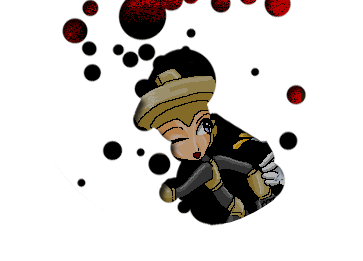 Morning... Everyone is just waking up...

Crystal: SHUT UP AND SLEEP!!!

Crystal: Nothing. Star was just yawning in his sleep.

Gravity: Okay guys- Gimmick has made us a nice breakfast, so we should all get up.

Charge: You told me there was no food left!

The door opens, and in walks Stone Man

Stone: Hey everyone! Isn't it a lovely morning? I just went for a short walk before breakfast.

Charge: I wonder what's for breakfast... WHAT?!!

Gravity: Calm down. I think the breakfast is probably under the dead rat.

Stone (looking closer): Nope. Looks like it is the dead rat. Who wants the head?

Napalm: Can I have the legs?

Telephone (voice): "Have you noticed yet?"

Crystal (to phone): Listen, what number where you trying to reach?

Telephone (voice): "I can't believe this. It's your Arch Nemesis, Dammit! I'm attacking the city!!" (hangs up)

Gyro: Who was it?

Crystal: Looks like we haven't got time for breakfast, fellas- Arch is attacking the city!

Napalm: Arch? How did he get our phone number?

Star: What the hell, lets go and stop the little moron.

And so our heroes are called out on a mission of not quite utmost importance...

Gyro: You said it, buddy. We're the only team without some nifty form of instant transport.

Gyro: Star, your idea of a hard drink is orange juice.

Gravity: Look- there he is!

Napalm: Oh yeah? And why is that?

Crystal: Arch, we always stop you.

Star: What are you intending to do with a paint gun?

Charge: You're even stupider than we thought you were!

Arch: But you don't understand- this paint gun is filled with...

Charge: I said that!

Arch: Yes! Observe... I aim at this innocent pedestrian... and BLAM!!!

Arch: Exactly. And I will now make everyone in the city blonde, forcing them to bow to my demands!

Star: What a fiendish plan!

Arch: And you can't stop me! But now I must be away... I won't let you get bored though- GEORGO!

Georgo picks up Crystal Man, and throws him against a wall

Gyro: Ouch... that must have hurt... Take this, fatso! Launches a barrage of Gyro Blades at Georgo

Star (putting up a Star Crash barrier): Nobody attacks my team!!

One of the power stones hits Star Man, not harming him, but destroying his protective Barrier

...The other slams into Georgo, putting a large dent in his armour

Crystal: Feel the sting of the Crystal Eye, you oversized oaf! Creates a Crystal eye

The napalm explosions knock Georgo to his knees- causing the Crystal Eye to pass over his head...

...And collide with a wall, sending bouncing shards of crystal all over the place!

Charge: They're his weakness! Hold on, Napalm- I'll charge and knock Georgo into oblivion!!

As Charge Man runs forward at a hefty pace, he suddenly finds himself floating in mid-air, as do the others...

Gravity: I fail to see the gravity of the situation...

Georgo: WHAT MAGIC IS THIS?! DEATH TO YOU ALL!!!

Everybody, and all the bouncing crystals, drop to the ground, creating a simultaneous "Ooof!" from all...

...Except for Gravity Man of course, and Star Man, who is used to strange gravity...

...And Stone Man who simply becomes a pile of rubble...

Gravity: Oh! I forgot about your weakness Gyro! I'm sorry!!

Gyro: Next time you forget, I'll send you a little propellor present... right up the-

Stone: YAAH!! DIE YOU BIG PINK TRASH BUCKET!! Tackles Georgo and pounds him with his fists

Georgo: ...I'm outta here! Limps away as fast as he can

Stone: Yeah! That's why we're Robot Masters, and you're just a mid-level baddie!

Star: Right! Now to find Arch, and stop him!

So the team follow the trail, eventually finding themselves at...

Star: This would seem an appropriate place.

Napalm: Then lets go in and get that S of a B!

They enter the Salon, prepared for the worst, and finding the first room empty, continue through the building until...

Arch: Drat! I guess this means you defeated my robot!

Star: Yes, And now we will defeat you. Give up Arch, we have stopped you again.

Arch: It's not that simple, fool! You may have found me, but half the city is already blonde! You're too late!

Gravity: I'll just fill the paint gun with a universal solvent, and we can remove the blondeness.

Gravity: Has anyone got a hairbrush?

Napalm: NO!! You made Gravity Man blonde!!

Gyro: You are one sadistic bas... NO! Don't aim that infernal weapon at me!!

Arch: Surrender now! In a few hours I will rule the city!!

Stone: Even if you do defeat us, you'll never rule the city- There are plenty of other teams to stop you!

Crystal: Like the Sinister Six, or the Mechanical Maniacs, or Cossacks Creations, or-

Arch: Hah! Don't you even know? Those other teams don't really exist! They are just myths- Like democracy!

Star: No! This cannot be! Pulls out a mobile phone and quickly dials...

Star: Do you exist?

Gauntlet (On Phone): What?

Gyro: Haha! You're out of ammo, munchkin!

After the dust (or paint) settles...

Napalm: No- I'm not blonde.

Charge: Well, it obviously didn't- None of us are blonde.

Gyro: No actually, I meant how I blew the paint back at Arch with my propellor.

Star: I thought I protected us with my Star Crash!

Stone: No- It was me, I knocked the gun around just as it was about to fire.

Crystal: Actually, I blocked the gun barrel with a small crystal, causing the gun to backfire.

Gyro: It was me! You guys are just jealous!

Stone: Jealous? Of you? Ha!

And so amidst their arguments the team have saved the city ... But they are still as poor as church mice. Will they ever pay off their debts?

Gravity: How long does this stuff take to wear off?