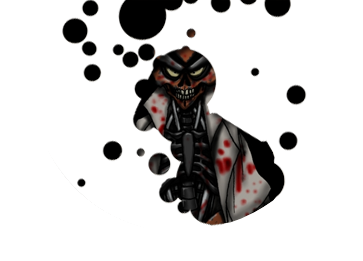 DRW starring in:
"Being a sneaky git in three easy lessons"

Mid Afternoon, and the team have been having a siesta...

Star: It's pretty boring around here...

Napalm: Yeah, there's been nothing to do since the TV exploded.

Gyro: I'm getting a bit hungry too. We haven't eaten for two days.

Gravity: There was that water biscuit.

Gyro: Oh yeah, there was that water biscuit.

Crystal: Anybody want a game of cards?

As Crystal Man begins shuffling the cards, the sound of a creaking door is apparent...

Crystal: Either someone is playing strange sound effects, or...

Star: Why not? We've not got anything else to do.

Stone: I hate to say it, but it'll be pretty obvious if we try and shadow him, we're not the most subtle team...

Crystal: You're right. If it was just Star and me, then perhaps we could...

Napalm: No way! We're all going!

Star: Then we'll need an expert to help us... picks up phone, and dials

Telephone: "You have reached the Mechanical Maniacs. I'm sorry but no-one is here to take your call right now..."

Star (hangs up): Oh well, I guess Gauntlet isn't in. I wonder where he is?

Gravity: How did you know we needed your help?

Gauntlet: I have my contacts. Information is my business.

Napalm: Can you help us track Charge Man?

Crystal: You see, he's always sneaking off, and we don't know where he goes.

Gauntlet: Perhaps he has a girlfriend.

Gyro: Hey, we are talking about Charge Man, right?

Gauntlet: Good point. (looking around) I can tell you don't have much money... any money...

Gauntlet: So, you owe me one.

The team head off, led by Gauntlet, and are soon stealthily stalking Charge Man

Stone (looking at Charge): He seems to be wearing some kind of hood.

Crystal: A poor disguise, to conceal his identity. If it wasn't for his funnel, it might work.

Gauntlet: Shh! Don't talk so loudly, he may spot us.

Gravity: He's stopped- There are more of them... people in hoods...

Star: Oh no! Charge Man must be caught up in some cult!

Napalm: I hope it's not an evil cult!

Crystal: Perhaps they might summon a demon or something... Maybe they sacrifice children...

One of the figures checks his watch...

Gauntlet: They're waiting for something... or someone.

Gyro: You don't think they're planning to hi-jack a train do you?

Star: Listen! One of the figures is about to speak!

Gyro: They must be planning a train robbery!

Napalm: I never would have thought that Charge Man would get involved in anything like this!

A low rumble, slowly increasing, approaches, and the train lights are soon visible

Another Hooded Figure: There it is!

Gauntlet: I'm afraid it looks like something worse than train hi-jacking...

Crystal: Actually, I was going to say demon summoning.

Gravity: So, you're a trainspotter?

Hooded Figure: Wait a minute! You mean he is- 'the' Charge Man?

Star: Of course! Don't tell me you were actually fooled by his disguise?

Hooded Figure: Charge Man!! I can't believe it is him!!

Other Hooded Figure: Or TOCMTFC for short.

Charge: Wow! I have my own fan club!!

Stone: They can't be serious...

Hooded Figure: Oh, but we are! Deadly serious!!

Gauntlet: Well, I guess my work here is done.

Gauntlet is about to slip off into the shadows, when all of a sudden...

Another Hooded Figure: Yes! He must pay his respect to Charge Man before he departs!

Shady Looking Hooded Figure: What? (Shoots the Charge Man fan) I don't care about that stupid train! It's Shadow Man I'm after!

The fan club scream and run off- unfortunately right into the path of a particularly nice looking express train...

Gauntlet: I thought I taught you a lesson last time... Oil Man!

Oil Man (discarding his hood): Yes and it was a lesson that I haven't forgotten- But I am the teacher now!

Stone: Oil Man? What kind of a lame robot master is that?

Napalm: Yeah, What are you gonna do? Oil my armour?

Oil Man: I am the greatest of all the robot masters!

Charge: You killed my fan club!

Gauntlet: Throws two shadow blades at Oil Man, and dives to the side

Oil Man (ducking): You are no match for me, Shadow Man! Squirts everyone in the area with oil

Stone: Great! I was getting kinda thirsty!

Gyro: This guy must be some kinda joke...

Crystal: Hey Gauntlet, can you bring your friend around more often? We could do with the free oil...

Oil Man is struck in the knee by the Shadow Blade

Oil Man: ARG! Don't make fun of me like that! Sprays oil onto the floor

Stone: No really, I was being serious! Join us Oil Man- your friends have failed you!

Oil Man: What are you talking about? My friends aren't even here!

Gauntlet (throwing another two Shadow Blades): Oil Man- You know you are the weaker!

Gravity: Why are you here anyway?

Oil Man (getting hit by both blades): Well, I was going to rob the train. Until you all turned up and ruined everything!

Gyro: I told you!! I knew they were going to rob the train!

Star: Do you reckon we should join in the fight?

Napalm: Nah- I think its personal. We shouldn't interfere.

Stone: I'm surprised that none of our enemies have turned up.

Gravity: Hah, he's probably still blonde... He got sprayed with about ten times as much paint as me!

Gyro: Who else have we fought? There was Dark Man... but he won't be back anytime soon...

Crystal: Unless... You don't suppose that Oil Man might not be who he seems?

Star: I'm sure that's Oil Man, because Dark Man is much more devious!

Stone: Hehe, We don't really have many enemies...

Voice: Yet you have failed to mention your most powerful one!

There is a sharp swish and...

Gauntlet: You've always been a coward! Now you will die one!! (Runs after Oil Man)

Stone: Papercut Man, why have you returned?

Papercut: You all humiliated me! You laughed- but look who's laughing now! MWAHAHAHAHAAA!!!

Crystal: Five points for the insane laugh! But you could do with some work on the facial expressions.

Gyro: Lets get this over with... Throws Gyro Blade at Papercut Man

Papercut: You still don't take me seriously! Gets hit by Gyro Blade

Papercut: Haha! And that was without lemon juice!!

As the Star Crash hits Papercut Man, his gravity is suddenly reversed!

Papercut: Ah, but I am as light as paper- watch me as I float down with ease!

Papercut Man does so

Stone: My turn! I'm gonna fold you up and throw you away, like the paper you are!

Papercut: Ha! No you're not! Throws Paper Cutter

Stone: I warned you!! Picks up Papercut Man, folds him into a ball, and throws him away

So, at the end of an eventful, and not quite as boring as expected day...

Charge: Well, my fan club got killed... but at least none of us got hurt...

So the curse of Papercut Man lives on, and Gauntlet and Oil Man are probably still fighting...

...but as for everyone else? Sleep is as good a pastime as any.