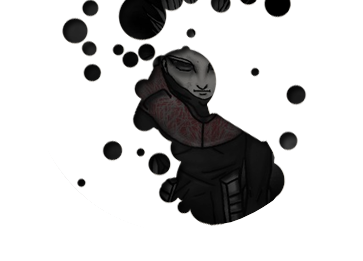 "I'm not sure this is the same place, actually..."

Hoshiko scrutinized the virtual environment her team's navis had entered. On Darklight's recommendation, they had Drillman, Flamechick, and the newly recovered Overdrive head back to the area where IceChan encountered the first Darkloid. However the internet area Hoshiko remembered for its thick fog and snow-covered walkways had been replaced by a fairly standard clear skied, dry panelled sector. The only thing that stood out about this large, empty area now was the cluster of cracked and burnt platforms that indicated a recent battle.

"These are definitely the coordinates the previous squad recorded." Tricia confirmed. "Although the server status has changed quite a bit. Viral levels are down, elemental ratio has levelled out, and new localized node damage..."

"Sounds like there was a violent solution to the area's poblems." Moe gave a half-hearted chuckle. "Is that good or bad for us?"

Drillman circled above the damaged terrain in his flight mode. "If the Darkloid was behind the mist, and it was deleted here, I'd say...bad."

"Agreed." Flamechick monotoned. "Darklight suggested this location because it was our best lead on Darkloids that didn't directly involve the Undernet...It seems we missed our chance."

Overdrive rubbed the back of her neck anxiously. "Besides, if someone we don't know deleted a Darkloid like that, I'd say th-that- -d to the list."

"...What was that, Overdrive?" Tricia asked her navi, not sure what she just heard.

"I said, something with the power to delete a Darkloid ought to be another concern to add to our list." Overdrive repeated, louder, wondering if she mumbled the first time. "They'd have to be even stronger than the Darkloids, and we don't know if they're on o-our- -ecause- -c-common enemy."

Drillman landed by Overdrive while shifting to his normal humanoid mode. "Are you all right? Did you come out of repairs too soon?"

The fleet-footed femme fatale was slightly offended by what she felt was unnecessary concern. "I'm fine! What's the matter? You're wor- -s- -a."

"Well, it's just the way you keep stuttering and skipping words. Was your vocal processor glitched from that thing with the Darkloids?"

"It's true, I think you're the only one that didn't notice." A worried Tricia surmised as the others nodded in agreement. "You're healthy as far as our equipment can tell, but maybe there are still some bugs we'll have to dig deeper to fix."

Overdrive sank with exasperation. "Ugh, it figures! Never touched a Dark Chip but those bastards still manage to taint me with their glitchy sh- -mal again.

Flamechick quietly turned away to continue exploring the area, apparently not keen on listening to the subject, truncated though it may be. The others remained momentarily distracted by Overdrive's problem. Tricia tried to put a positive spin on it. "A speech bug isn't that bad. We'll look into it when we're done here. You should still be okay for everything else."

"I b-better be. I can't stand to be out of c-commission any longer..."

"If you're sure about that, we might as well get back to the task at hand." Flamechick spoke up to remind everyone.

Drillman bobbed his fixed upper-body forward, his best approximation of a nod. "Right. Well Overdrive made a good point about finding out about who did this. Assuming a fight is what went down here, anyway. It bugs me that just as we're getting closer to solving this case, we run into some other unexpected variable."

As the Official navis searched around the battleground for clearer evidence of what transpired there, another presence observed them from a short distance away cloaked by Invis. Two humans from different locations outside the system monitored the feed this hidden navi sent to them.

"This is quickly turning out to be a waste of time. I was promised Darkloids if we followed these peons of yours."

"Have some patience, Miss Alia. If it comes to it, they will move on to the Undernet. Either way, you'll be better off staying close to them."

"He's right, Alia." The hidden navi whispered. "I saw for myself how one of the new Darkloids trashed Darklady before she merged with me. I would rather not go looking for them alone."

Alia sighed. "Well you could at least be doing something besides watching and hiding like some stalker. If we're all on the same side, what's the point?"

"The point is that Drillman down there likely won't be comfortable with the idea of his friend being possessed and enslaved by an amoral Dark Power researcher." Darklight explained bluntly. "Those guys don't even like me very much. I would prefer to avoid causing further tension."

Darklady nodded. Despite being wary of his methods at first, she was finding their new acquaintance Samuel to be fairly agreeable. "So the plan is to bait another Darkloid conflict, let those navis do the heavy lifting, then I swoop in at a critical moment to save the day and win their trust?"

"Pretty much. It's corny, but in a crisis it works. Just keep in mind these Darkloids are tough even when outnumbered, so focus on survivng, not so much on winning." Darklight advised.

"Same thing, as far as I'm concerned." Darklady said with a sinking feeling. Then she snapped back to attention as she spotted movement off to the side. "Hold on, someone else is coming. Don't think it's a Darkloid though."

Another navi rushed down the walkways toward the group of Officials. It didn't go unnoticed, and Drillman and Overdrive both winced when they recognized the new arrival. "Oh no. Who called her?" Drillman asked no one in particular. He also beckoned to Flamechick not to attack since he could see her clutching the mouthpiece of her mask ready to release a defensive stream of fire. Moe and Tricia shrugged. They silently concluded they would have a question for Darklight next time they saw him about why he was trying to complicate things even more.

"Hey guys! I was looking everywhere for you! Why didn't you call me?" The violet sorceress known as Magister exclaimed as she bounded up to the other navis, unknowingly answering their question with her own. "It's that you don't think I'm any help, right? I'm just getting in the way. I'm sorry." She whimpered, suddenly shifting from the peppy and irate tone she entered with just a few seconds earlier.

Drillman tried to calm her down. "N-no, Magister. You've done well. It's just that you're not officially part of the investigation, so you really should leave it to us. You've done enough by giving us the lead on your friend. We'll still do our best to bring her back safe."

"What does it matter if I'm not 'official'?" She shot back, angry again. "What about that one? She wasn't on your team before either!" She pointed at Flamechick accusingly.

"I am an ONBA registered navi. My operator and I have officially transferred to this unit." Flame answered calmly, starting to gather the deal with this girl.

"Fine, then make me an Official already. How hard can it be?"

Drillman sighed. "You're welcome to apply and find out, but for now you really need to go home and let us take care of this ourselves."

"You were fine with it before. Where did that stick up your ass come from?"

Drill was taken aback. Overdrive chuckled at his expense. She was staying conveniently silent otherwise, no doubt using her voice glitch as an excuse to stay out of the conversation. Drillman wasn't sure how to justify it himself, at least out loud. He didn't want to make Magister cry again by telling her that she wasn't really that useful during the last couple of outings she insisted on participating in. She had decent combat capabilities, but her information wasn't getting them any closer to their goal and if they did run into a Darkloid, he wasn't convinced she would be more of an asset than a hinderance.

On the other hand, he had to admit he'd been less free-wheeling since he'd had to start taking the leadership role, if not since he returned to the Officials. No one else was even saying anything and he didn't like the whole decision resting with him. He also had to admit a slight weakness to the demands of pretty girls.

"...Alright, you twisted my arm. Just don't blame me if you get eaten today."

"Yes!" Magister exclaimed and jumped up and down while Overdrive rolled her eyes at her partner's pushover response and Flamechick crossed her arms attempting to understand the sudden turn of events. The mage stopped jumping to point towards the southwest. "Then you need to come with me to this area a few blocks over. I thought I saw that purple girl from last time there."

"Wha? You mean Darklady? You're kidding me." Drillman said with a fair amount of skepticism.

Not far away, Darklady tensed up, wondering if this girl somehow detected her. The only odd thing was that Magister was pointing in the entirely wrong direction, at an area she was pretty sure she didn't pass through. She fought back the urge to react rashly as if she were called out.

"I was trying an IP locator spell in the area when I spotted her just a few minutes ago, then I tuned the spell to you guys and luckily enough you were nearby! I came right over. She may still be hovering around there." Magister beckoned for the others to follow her.

Drillman was bewildered. "Uh...back up. Locator spell? How does that work? Could we have been using that to find the missing navis?"

"Er...like I said, 'trying'. I think it only picked up you because you were online, close, and not actively hiding. Sorry."

"You ought to check it out." Tricia reccommended. "It's not like we have much else to go on at the moment."

As Magister led the other three navis up the path away from the scene and the Undernet entrance, Darklady remained still, clasping her mouth and silently giggling as if she were playing hide-and-seek and just narrowly avoided detection. Alia was less amused by the scenario. "You might as well jack out. They're not going to find any Darkloids any time soon and now they're actually searching for you. How did it come to this?"

Darklight had other ideas. "If Magister knew where Darklady was, she wouldn't have pointed the wrong way...I think it's worth following them to see what's really going on. You may get your wish yet."

"Gotta admit, I'm curious to see where this is going." Darklady smirked and silently took off after the Officials and their interesting helper. Her creeping excitement betrayed her covert role. It was as if something inside her wanted to get caught.