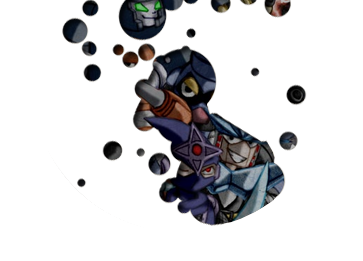 Wraithman's Revenge: A crazy mixed-up epilogue based off a late night chat. It may not be canon, but I wouldn't get hit by it.

I Am Megatron: With the war over the Cossacks crash at the Armored Assassins' headquarters. But why does Magatron have to bother them just as Dive's making the place nice and homey?

An Offer They Can't Refuse: Desperate for cash to repair their base the Cossacks turn to Don Girovega for help.

SAVAGES!!!: The Comrades are bad neighbors? Perish the thought!

Day of the Tentacle: Why is Launch Octopus of the X1 team Alpha Movement so messed up? Well, let's take a trip to the past and find out.

A Skeleton in Reg's Closet!: The Cossacks receive a new Comrade in the form of Hunter - the all-new kinda different Skullman!

Farewell Zapper: After Zapper dies Regulus becomes the new Toadman and starts losing it. Note: this is not a traditional epilogue.

Diveman vs the Deceptidunks: The Comrades finally get Diveman into Alcoholics Anonymous, but the Decepticons won't let that stop them from attacking Drillman.

Ballade's Revenge: The Comrades are invited to the grand opening of the Windy Trails restaurant. It can only end badly.

Rise of the Panzerkons: Reinforcements from Cybertron come in to help Megatron against his battle against the Comrades! Will they fare any better than Megatron?

Of Notes and Chips: The Black Lotus create the awesome and totally-original Death Lappy. Unfortunately for them it falls into the hands of someone with even less of a conscience than they do - Diveman!

Digital Dilemma: Cossack's Citadel is under attack and it's annoying everybody. Cossack's Comrades.exe return!

Fist Full of Gemstones: No good deed goes unpunished as Pharaoh gets caught up fighting against thugs on behalf of a lovely young lady. Can't a guy go out for groceries without all this nonsense?

DIES IRAE!: - The Panzerkons attack the Comrades once again! But this time they have a new trick up their sleeve.

Project Stolen Stonehenge Start: Black Lotus attacks with an all-new weapon. Their target: the newspaper boy! Seriously, that kid needs to get on his shit.

The Bastard, the Dick, and the Creepy: Don Girogeva has new competition: the Panzerkons! Naturally, our heroes get drawn into his mess.

Buyer Beware: Swindle calls in the favor Diveman owes him and sends him on odd jobs all over the world. How long until Diveman kills the poor bastard?

Wizards and Comrades: Skeletor and Mumm-ra decide to replace Pharaoh and Skullman on the team! What could possibly go wrong?

Who Watches the Comrades Parts 1-2: Megatron? The Black Lotus? Dr. Cossack? Whoever it is better not be watching while we're changing!

Who Watches the Comrades Parts 3-5: Do you think it's Jay and Silent Bob? Who could that peeping tom be?

Who Watches the Comrades Conclusion: Face to face with the pervert! The epic saga reaches it's climax!

Once and Future Drill: Has the time come for AM to pass the mantle of Drillman?

A Short Sendoff to the CC: The time has come for the team to go it's seperate way. But first, the team has a few loose ends to tie off.