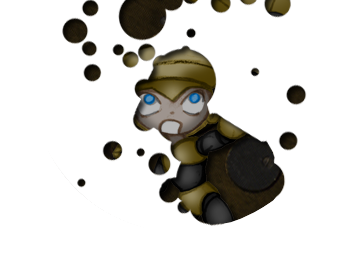 So, a few months ago I was going through Deviantart and came across some very old art done by Snake and I say to myself, “Geez, I don’t think that’s ever been put into the gallery.” Turns out I was right. But not only about Snake’s work, but a whole slew of others! Well, there’s no time to like the present to post these old pieces of art, so here we go!

Classi’s old Megaman 3 music video. This was only accessible through the old video player I made and I completely forgot about it when I made each video a separate thing in the gallery (there were many more official videos than fan made ones, so this slipped through the cracks). Well, it’s in Classi’s main gallery now and a new Video section in the team galleries. Although there’s still not much there, I suppose this is more organized.

Some older art of Raijin’s featuring Bizarro Shadowman and his own version of Snakeman. Yeah, that picture up there belongs to him as well. The pics of Bizarro is what started me on getting all this long-overlooked artwork onto the main site! Geez, Raj, can’t you do your own uploading?

About three YEARS back, before he disappeared into the abyss, Hardman made his own art thread. And here’s all the images from it FINALLY, not only here on the main page, but in the official Mechs galleries as well as the Business of War gallery (where appropriate). Yeah, you’d think I’d have got through all the War stuff by now, but I seem to keep finding more to add. These pictures also serve as a community snapshot – things would never be quite the same afterwards.

I kinda figured Hard would put these into his own gallery eventually, but … here we are. And some of these guys appear in the fiction, such as Constance, Cassandra, and Gaderham, so it’s really handy to have these pictures in the official galley. 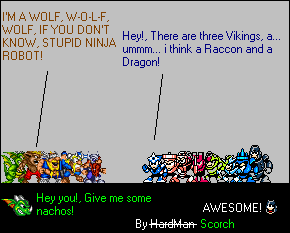 Finally we have some fan art. I love fan art. We have some fanmade ‘Maniacs Moments by Scorch, fanart for Hardian specifically by Bright Babe, some fan-art practice sketches by Erirudo, a drawing Class earned by going into a contest by Kurai-Hato, sprites of me, Lennon (as Strider), and Hadrian by MM19872008 and a Superadventure style Artilleryman by General RADIX.

This entry was posted on Sunday, April 11th, 2010 at 8:31 pm and is filed under gallery. You can follow any responses to this entry through the RSS 2.0 feed. Both comments and pings are currently closed.